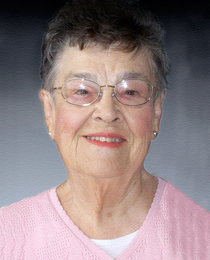 Peggy was a 1945 graduate of Kokomo (Indiana) High School and attended Bob Jones University for two years. On June 10, 1950, she married Reese A. Johnson. For 40 years she served with her husband as a part-time secretary while he pastored Cosperville Baptist Church, Wawaka, Indiana; Evergreen Baptist Church, Michigan City, Indiana; and Riverside Baptist Church, Decatur, Illinois. Together they also traveled to several mission fields in South America; Togo, West Africa; and Manila, Philippines.

Peggy touched the lives of many people and will be remembered for her godly disposition, humble spirit, and generous heart.

She was preceded in death by her infant daughter.

She is survived by her husband of 65 years, Reese; three children, R. Christine Criss, James, and Daniel; nine grandchildren; and six great-grandchildren.

A funeral service was held at Bible Baptist Church, Kokomo, Indiana, where she was a charter member.

Next post Planned Parenthood, “Another Boy,” and Rachel Weeping for Her Children