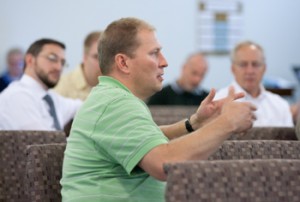 Knight was just elected temporary moderator of a new local church fellowship in Michigan’s Upper Peninsula. He describes the area as “an island removed from the culture around us,” and hopes that the new fellowship will help church leaders find a way to encourage and build each other up.

Ken Floyd had visited the group on behalf of the Michigan Association of Regular Baptist Churches, a state fellowship of more than 200 churches organized into six regional groups. But Floyd described how the current structure lacked effectiveness—Michigan’s Upper Peninsula has 15 GARBC churches in an area larger than the state of Maryland. However, there are several more like-minded churches who are not in formal fellowship with the MARBC who would also benefit from the regional association. As a result, the state’s Council of Fifteen sometimes lacked representation from its northernmost churches.

And northernmost it is. Find a map and search for Michigan’s Keweenaw Peninsula, a finger of land jutting into Lake Superior, surrounded by water and not much else. Here you will meet Bruce Nolen, who has been pastor of First Baptist, Calumet, Mich., for 39 years. He and many other pastors minister hundreds of miles from the nearest interstate, in a region where cell phone service and Internet access can be iffy at best.

Brian Knight will also become the 16th member of the MARBC’s advisory council, which has for years been known as its Council of Fifteen. In a recent meeting they voted to add an additional member to represent the newly formed regional fellowship. 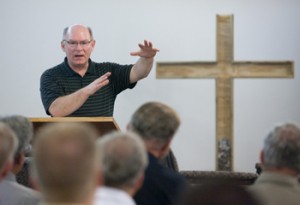 “I have been commissioned by the council to let you know that their desire is to have you organize—however you like—into a new regional association,” Floyd had said as he opened the meeting. Carefully explaining that his role was only advisory (Baptist churches have no ecclesiastical hierarchy), Floyd said, “You can do this however you want. The key thing is to get a strategy and implement it.” Ever mindful of his Baptist roots, Floyd describes the seventh regional association as “something new . . . we don’t like to use the word ‘split’!”

The pastors had asked Floyd to describe the purpose and benefits of forming another regional association. He responded by emphasizing their mutual encouragement of each other, the opportunity for instruction on current issues, and the possibility of sharing resources for regional outreach.

“Meeting together in a church association removes some of the feelings of isolation in ministry. You develop relationships with someone near you that you can call for advice. And our churches have found that, even when they have the resources to do something, sometimes it’s better to ask for help,” he says.

Ken Floyd’s formal title is executive ministry director of the MARBC. The state association had previously called his job the “state representative,” but Floyd tells how that led to a certain amount of confusion when he visited churches. State representative? Was he a politician?

No, says Floyd. His actual role is closer to his roots as a GARBC pastor. For the past six years he has traveled the state in a ministry to encourage pastors, make connections between churches, and organize MARBC events. 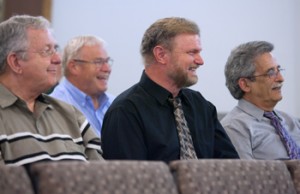 His current ministry has roots in his own experiences growing up. Looking back, Floyd remembers his parents as “great, moral people, but they took me to a morgue every Sunday.” He recalls getting a free Bible from his former church, but thought it odd that they never used it during the services.

“I came to Christ at the end of my senior year in high school, through the witness of a family from a Regular Baptist church who moved next door to us,” he says, describing how the congregation of 90 people embraced his family, discipled them, and taught them from the Bible. Both of his parents would become believers as well.

Giving up his plans to become a medical doctor, Ken graduated from Cedarville College and Grace Theological Seminary. He became pastor of his first church when he was 25.

“I had been saved eight years. Suddenly I was at my first church, ministering to people who had been saved much longer than me. I learned to appreciate our area pastors’ fellowship because I could sit and listen to men who were full of wisdom and experience—guys who had been hit in the face a few times—as I learned how to be a pastor.”