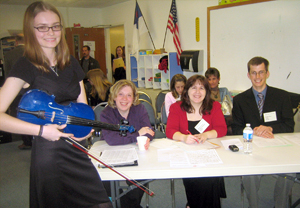 Craig Golden, state representative of the ESF, says, “It was an incredible day of blessings. One youth group returned home so excited about the day that they have already enlisted eight more teens to participate in the Share Your Talents program.”

The day included the GARBC-sponsored Talents For Christ contest. Craig says, “It was a day filled with tension, some tears and anxiety, but mostly joy.” Not only did the contestants receive encouragement, but they were shown through adjudication forms how to improve their talents while serving the Lord more effectively. Craig says, “Trophies and medallions were awarded, hugs and slaps on the backs were given, instructions and suggestions were offered, and at the end of the day, everyone was on the winning team.”

Generate desires to see churches renewed and strengthened. Through the Generate Renewal Grant, churches can work with experienced consultants to help fuel the health of ...more