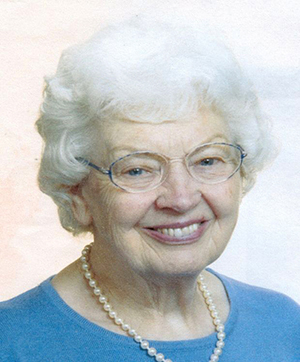 Marjory married Robert W. Baker on Oct. 12, 1940. They began their life as husband and wife on a farm near Owasa, Iowa. Later she accompanied Robert to Grace Institute in Omaha, Nebraska. She ministered with him through a radio ministry in Oskaloosa, Iowa, singing the introductory song, “Grace Greater than Our Sins,” and doing the Saturday morning children’s program.

Throughout her life, Marjory took an active interest in missionaries, financially supporting eight missionaries. Among her many ministries during her retirement years in Davenport, Iowa, she became the “Cookie Lady” of her neighborhood. As the children came for cookies, she would read Bible stories. Her greatest mission in life was introducing people to Christ.

A funeral service was held March 15 at Berean Baptist Church, Davenport, Iowa, where her son Mark is pastor.