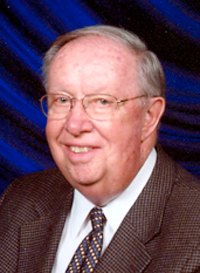 He was born in Staten Island, N.Y., where his father, James Sr., was pastor of South Baptist Church for 47 years. James Jr. preached his first sermon there, and near the end of his ministry life he returned to his home church to preach his last sermon for the same congregation.

He enrolled in Baptist Bible Seminary, Johnson City, N.Y., and graduated from the ThB program in 1957. While a student at BBS he met Shirley Stewart. They married in 1954 and would enjoy 58 years of ministry together.

“I became a theologian when I took my first church,” Grier said later. “There I had to handle the text on a regular basis, and in dealing with the text I had to test what I had been taught.”

His interest in theology led him to enroll in the ThM program at Westminster Theological Seminary. There he studied apologetics and philosophical theology with theologians such as Edward J. Young, John Murray, and especially Cornelius Van Til, who taught from the Dutch Reformed tradition. “You would be about 10 minutes into the lecture and he would revert to Dutch, and he did not even know he had done so,” Grier recalled.

At Westminster Grier found his theology gaining substance and nuance, grappling with ideas that would significantly influence his teaching philosophy. Was it necessary to prove God’s existence by appealing to rational arguments? Did a preacher need to prove God’s Word is authentic before delivering its message? As Grier studied, he became convinced that the message of the Bible is self-authenticating.

Grier resigned from his church to become professor of philosophy at Cedarville University (1969–1982), finishing his ThM at Westminister and then earning a ThD from Grace Theological Seminary.

During his Cedarville years he and Shirley were active at Grace Baptist Church, Cedarville, Ohio. At various times he also served as interim pastor at eight churches in Ohio and Indiana.

“If Jim Grier was preaching somewhere, I’d want to go hear him,” Stowell said in a Baptist Bulletin interview. “He was very winsome in the pulpit. He wasn’t dry and boring. He had the ability to draw you in and listen, as though you were chatting with a friend.”

When Stowell was president of Moody Bible Institute, he invited Grier to speak at the Moody Pastor’s Conference. “His preaching never left me unchallenged,” Stowell says. “His theological insights were like, ‘O my goodness, I’ve never seen that before!’ And his ability to make them applicable pressed me to apply the outcome of those insights to my own life.”

In 1982 Grier became the third dean and executive vice president of Grand Rapids Theological Seminary, positions he held until 1998. He continued teaching at the seminary as distinguished professor of philosophical theology.

Now president of Cornerstone, Stowell remembers Grier as “a renaissance man with a multiplicity of great capacities.”

“He had the blend of strong administrative gifts and also theological gifts and preaching gifts. Most guys get one of those,” Stowell says.

Grier made a notable contribution in philosophical theology, says Charles Alber, a retired GARBC pastor who served on Cornerstone’s board for 25 years.

“Our association was always strong in systematic theologians,” Alber says, “but Grier took a different approach, looking at the same ideas from a new perspective.”

For Grier, this meant keeping membership in both the Evangelical Theological Society and the Evangelical Philosophical Society—and actively exploring the relationship between the two disciplines. His approach to theology did not emphasize the strict and orderly arrangement of Christian doctrine (systematic theology). And his approach did not necessarily explore the way theological ideas are developed in a particular passage of Scripture (Biblical theology). Instead Grier explored the way Christian theology emerged as a philosophical system, and the way it intersected with rapid changes in society. If theology is about knowing God, how do we know?

In the late 1960s, most conservative evangelical church leaders spent little time worrying about the advance of postmodern philosophical ideas. Grier’s teaching functioned as an early warning system for the slow of heart. Directly addressing what he called “the twilight of modernity,” Grier began to adopt specific strategies for presenting the gospel to a world system that was rapidly changing.

But Grier also offered a stern critique of the modern church-growth movement (“grasping at the straws of modernity to bring success to our ministry,” he said). To his way of thinking, no mere method or program could fully persuade an unbeliever that the Bible is true. His solution was to present the Bible as its own self-authenticating witness, one that could be understood only through the testimony of the Holy Spirit.

Ever wary of humanity’s limitations, Grier warned against leaders who isolated themselves as a supposed “Lone Ranger of Preaching.” Instead, Grier studied how his theological ideas existed in a long continuity of Christian thought.

“There’s a community here. I am built on the shoulders of others. I don’t exist in isolation,” he said at the 1997 GARBC Conference. “The content of the gospel that came to me relates me to a community. [The gospel] is in the midst of that community.”

His conclusion? “I am dependent on the community that birthed me.”

Joe Stowell expresses gratitude for the “theological weight and discipline” that Grier brought to Grand Rapids Theological Seminary. “Jim was always very demanding of doing things deeply,” Stowell says. “He was so non-clichéd. He was a man of significant nuances in his theological thought and he brought that to bear upon the seminary.”

While teaching at Cedarville and Grand Rapids, Grier mentored young scholars and encouraged them to write.

“We dare not impoverish the next generation by neglecting the production of scholarly works in development of the defense of our position,” Grier said in his 1983 inaugural address at Grand Rapids Theological Seminary. His own output included articles in theological journals and scholarly anthologies, but he also wrote Sunday School material for Regular Baptist Press and articles for the Baptist Bulletin. Despite this, writing would not be the focus of his ministry.

“He hated to write,” says Joel R. Beeke, president of Puritan Reformed Theological Seminary, describing Grier as a people person who loved to teach and preach.

“Faculty, students, Christian community! We must recognize the weakness of others, holding them up in their struggles, being sensitive to their needs when they hurt,” Grier had said in his inaugural address in Grand Rapids. “We must aid them when they are overwhelmed, about to collapse, and need a friend—even though we are overworked with job, family, and academic load. It means being united in service and ministry.”

Remembering Grier as one who used theology to develop personal relationships, Charles Alber says, “You couldn’t be around him without being influenced for godliness.”

Grier invested his retirement years by continuing to teach, especially to missionaries and international pastors. He remained in close contact with former students and continued his ministry of encouragement. Baptist Bible College honored Grier with its Outstanding Service Award in 1999, then named him Alumni of the Year in 2007.

He is survived by his wife, Shirley; his son and his son’s wife, Dr. Kevin Blaine Grier and Dr. Robin Grier; his sister, Joyce Elizabeth Grier; and several cousins, nieces, and nephews.

James Grier summarized his ideas about philosophy, theology, and ministry in a sermon he preached at the 1997 GARBC Conference in Grand Rapids.

“Doing ministry and doing theology is pretty well the same thing. The purpose of doing theology is not to end up with a book that we can set up on a shelf, and we can take it down so we can say, ‘This is Theology.’

“Theology is a verb. It’s an activity—everyone does it. The purpose of doing theology is to enact authentic Christian ministry.

Photos courtesy of the Miller Library at Cornerstone University.

Any tribute to Jim Grier cannot help but make mention of his extraordinary ability to express his thoughts in a precise and articulate manner. He was a spokesman in our circles that elevated the conversation about truth. He made us think. He prodded us to read more, study harder, and work at refining our communication.

But the lingering impression that I find myself most remembering at this time was his humble-hearted pastoral roots and his love for the church and the Head of the church. I have watched him speak to common church attendees in a small facility with gentleness and simplicity as He spoke of the Savior he loved and served. He was not endeavoring to defend truth or win an argument, but to exalt Christ. It is that love for Christ that prompted the love he had for his dear wife, Shirley.

When I first knew Dr. Grier, it was his mind that captured my attention. Later it was his heart that stirred my heart.