PALATINE, Ill.—Iva Greening spent her life in service to her Lord and her family. She was a loving and supportive pastor’s wife, mother, friend, and prayer warrior. 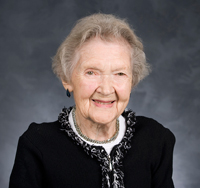 PALATINE, Ill.—Iva Greening spent her life in service to her Lord and her family. She was a loving and supportive pastor’s wife, mother, friend, and prayer warrior. Iva, 100, died Feb. 27 after a brief illness. She was the wife of the late Pastor John Edward Greening. The couple was married for 54 years, until John’s death in 1994. Born May 11, 1913, in Dunsford, Ontario, Canada, daughter of the late John and Elizabeth (Burgess) Robertson, Iva attended Lindsay High School in Canada. She met her husband as he ministered in her church. The couple moved to the United States, where Pastor Greening honorably served as a Baptist minister in a variety of locations for 50 years, including Buffalo, N.Y.; Philadelphia; Bowling Green, Ohio; Deerfield, Ill.; and Clarks Summit, Pa. Church was always of great importance to Iva and was the center of her life, says her son, John, national representative of the GARBC. “My dad met her at the church where he preached as a student pastor from Toronto Baptist Seminary. She was the church organist. Her dad was a committed Baptist due to his parents, former Presbyterians, reading their Bible and concluding that Baptists were the most consistent with the teachings of God’s Word.” 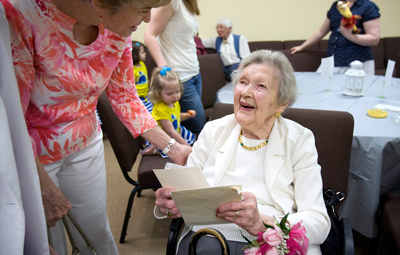 Iva Greening celebrates her 100th birthday with her church family.

Iva had been a member of Summit Baptist Bible Church in Clarks Summit before moving to Palatine, where she became a founding member of Great Commission Baptist Church, Schaumburg, Ill., planted by her grandson, Scott. She loved serving there and thought it was the greatest thing that her grandson and his wife were her pastor and wife, John says in his July 2013 Baptist Bulletin article “Iva Greening at 100.” Scott said in May 2013 that Iva “has been a wonderful impact on me during my entire life and I count it one of the greatest blessings for her to be a part of our church plant. She has taught our church how to welcome people and live their lives faithfully to the end. We are so thankful to God for her” (“Centenarian Celebrates a Wonderful Life”). Iva extended hospitality and friendship to all she met, even at age 100. (Read “Iva’s Hospitality Tips,” printed in a 1997 issue of Synergy, a GARBC newsletter for pastors and wives. She said, “Prepare extra food on Saturday so that you can bring guests home with you from church on Sunday.”) Those trademarks led to her earning a GARBC Service Award in June 2012, given to faithful servants who “have served with distinction in their GARBC churches.” (Read “GARBC Service Awards Announced.”) 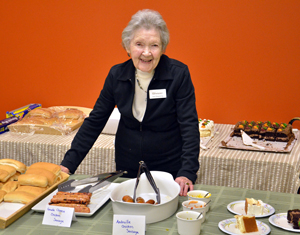 Surviving are a son, the Rev. John Robertson Greening and wife, Daria; granddaughter, Andrea Gower and husband, David; grandson, Scott Greening and wife, Brooke; four great-grandchildren; four nieces; and two nephews. She was also preceded in death by a sister, Olive Routery, and a brother, Delmar Robertson. Visitation, a time of reflection and praise, and interment will take place Friday, March 7 in Clarks Summit, Pa. A memorial service will be held at Great Commission Baptist Church, Schaumburg, Ill., on Saturday, March 15 at 2:00 p.m. In lieu of flowers, memorial contributions may be made to Great Commission Baptist Church, Schaumburg, Ill., or the General Association of Regular Baptist Churches. “We will miss Mom’s thoughtfulness, spunk, candor, love, and most of all her prayers,” says John Greening. “Our lives have been influenced for eternity because of her determination to live out the life of her Lord and Savior Jesus Christ.”
Posted in News, With the Lord on March 3, 2014.