I Believe in St. Nicholas

Wallace Alcorn's column from the Austin Daily Herald explains why he never believed in Santa Claus, but did very much believe in St. Nicholas (not the mythical character but the historic person). 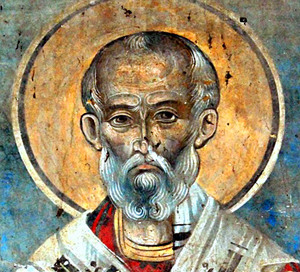 I never believed in Santa Claus, but I very much believe in St. Nicholas—not the mythical character but the historic person.

Nicholas of Myra was a pastor who loved children the way God expects us to love children and the way children need to be loved. St. Nicholas and Christmas help me remember. My parents never told us about a Santa Claus, but we heard from others. Suspicions began to arise when I sat on his lap in Schuster’s department store and minutes later saw him ringing a kettle bell right outside on Third Street. And another across the street. I put the existential question to my mother, and she explained without conviction these others must be “Santa’s helpers.”

The next time on the knee, I announced to my father: “There’s no Santa.” How did I know? Under that fake red coat—he had a “daddy shirt” on. The illogic notwithstanding, my father spoke reassuringly: “I’m glad you learned that Son, but don’t spoil the fun for the other children.”

We never taught Santa Claus to our children, and we let them discover the reality in their own way and time. Yet, we nurtured the fun of the “pretend story.” If Santa Claus doesn’t belong in Christmas, he does belong at Christmas. Most children, I think, catch on sooner than they let on. There is a mystical something a myth creates that harsh reality cannot reach.

I have been aware of Nicholas since undergraduate studies in church history. He was a fourth-century bishop of Myra in Anatolia, now included in modern Turkey. Just months ago we visited Myra and meditated in its Roman style church. I now know Nicholas as a man, as a pastor. I believe in this St. Nicholas.

Most of us aren’t comfortable referring to “St.,” but I do so here because of the common reference. Nicholas was “bishop” not in the medieval episcopal sense but in the earlier usage as pastor of a principal church.

My main interest in Myra had always been that the Apostle Paul visited here on the way to Rome (Acts 27:5, 6).

Almost 400 years later Nicholas became bishop here. Born in A.D. 270, his death is set at December 6, 346—thus St. Nicholas’ Day, now for centuries. The present structure seems to be an eighth-century reconstruction of the one erected shortly after his death. Services are held here only once a year, on December 6th, the Feast of St. Nicholas.

Locally, St. Nike’s nick name is Noel Baba (“Father Christmas”). Before visiting the church, we had lunch in a street restaurant of this name. The waitress patted me on the shoulder and affectionately called me Baba.

A plethora of myths have been fabricated about Nicholas’ acts, most outrageously lacking in credibility. Some people just can’t be content with the majesty of simple goodness by an ordinary man.

What I find believable, because it’s so like a kindly pastor, is the account of the shoes. One day Nicholas noticed some children’s shoes set aside while busy playing. Nicholas found some small coins in his purse and mischievously dropped one into each shoe. I can picture him slipping away, chuckling as he thought of the children’s surprise and puzzlement when they found the coins. As believable as I find the pastor’s trick, I find believable the report that children began intentionally to leave their shoes out in hopes of finding additional coins in them. And they did.

The story developed that Nicholas always went about dropping coins in children’s shoes. Well, somebody did. But I’m not sure this single man did it all. Perhaps there actually were Santa’s helpers in Myra. Perhaps parents and grandparents and neighbors and townspeople became inspired by the fun Nicholas had started.

Rather than disingenuously attributing miracles or even extraordinary acts to Nicholas, I think it does him more honor to recognize him as a loving pastor who encouraged his people to acts of kindness.

Hang stockings on the mantel, if you will. I have another suggestion for this Christmas.

Wallace Alcorn (PhD, New York University) is a retired army chaplain, educator, and pastor. He is a member of Grace Baptist Church, Austin, Minn. This article is reproduced by his permission from the Austin Daily Herald, where Dr. Alcorn’s column appears each Monday on the Insight Page.