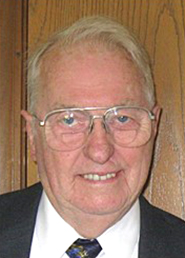 David served four years in the U.S. Army Military Intelligence during the Korean War in Korea and Japan. After graduating from Cedarville University and Grand Rapids Baptist Seminary, he took his family as missionaries to the Philippine Islands and six years later to Papua, New Guinea. He returned to the States in 1982, where he planted his 14th church in Copperas Cove, Texas. For the next 15 years he assisted mission churches across the United States.

While in Papua, New Guinea, he founded and administered Goroka Baptist Bible College, which is now 40 years old. For friends who would like to make a memorial contribution, he would be honored if gifts were directed to that college through the Association of Baptists for World Evangelism.

David was preceded in death by his first wife of 41 years, Joan. He is survived by his wife of 15 years, Lois; his children, Patti Pearson, Stephen, and Elaine Hollen; her children, Dan Hentschel, Doug Hentschel, Judith Grooters, and Nancy Ross; 22 grandchildren; and six great-grandchildren.

The funeral service was held on Saturday, Nov. 8, at Good News Baptist Church, Grand Rapids, Mich., where he was a member.