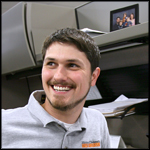 He was only 18—who knows where he’d gotten the alcohol—and had just dropped out of high school to find work in a no-name Texas town, living an empty life on the fast track to nowhere.

“I was cleaning carpets and drinking every night,” Blane tells us, 10 years later. He’s not the sort of guy who relishes his past life, so he speaks in summary, with both pain and victory in his eyes. Like the body piercings he gave up, his former life is gone now, but a few scars remain.

Blane’s wife, Kelly, smiles to herself as she clears the dishes from the dining room table. She’s heard the story before. Truth be told, it is what motivates Blane as a missionary with Baptist Church Planters. Now there is a certain Ozzie-and-Harriet quality to their life: Their attractive home in the Chalco Hills region of suburban Omaha, Neb., Blane’s job as an insurance actuary for Mutual of Omaha, and three kids who crawl over us while we talk.

Back in 1997, sobering up long enough to realize that he was well on the way toward making a mess of his life, Blane started to think about religion.

“I tried to read the Bible. I tried to cleanse myself and make myself a better person. But all I learned from the Ten Commandments was that I wasn’t going to make it,” Blane says of his spiritual journey. “I thought I’d have to straighten up before God could use me.”

Discouraged with his attempts at self-reform, Blane visited a Baptist church with a friend, where he heard the gospel for the first time-and was saved.

Three days later, Blane hopped on a Greyhound bus to Ladysmith, Wis., moved in with his aunt and uncle (who attended Ladysmith Baptist Church), and started back to high school. When he enrolled at Faith Baptist Bible College as a freshman, he had been saved only a year. Joining Campus Baptist Church of Ames, Iowa, while still a freshman, Blane participated in a wide variety of church ministries. The Ames church ordained Blane and commissioned the Barfknechts as church-planting missionaries in 2007. But after two years of deputation, and having visited more than 70 churches, they had raised only 10 percent of their needed support.

Blane and Kelly viewed Baptist Church Planters’ Timothy Program as the perfect solution. Moving to Gretna, Neb., the Barfknechts partnered with veteran church planters Roger and Sheryl Ridley. Blane quickly found work at Mutual of Omaha, but spent most of his free time mentoring with Roger and helping with the ministry at Gretna Baptist Church, where Roger already had ideas about the booming Omaha suburbs.

“When we first visited here four years ago, Roger told us about his vision for planting another church in Chalco Hills,” Blane says. “People asked why we are planting a new church with only six miles between Gretna and our target area.”

Omaha continues to grow, even during the national recession, so cornfields between the two towns will inevitably be developed into new housing, Blane says.

Blane identifies three ways to learn church planting. “First, just do it,” Blane says, noting that he learned a good deal by doing the regular tasks of church planting. Blane also credits the intentional conversations he had with Roger Ridley: thinking, talking, and praying through their strategy. Finally, Blane says he spent a lot of time reading about evangelism, church planting, and leadership. “Pastor Ridley reads a book a week, or more, and he points me to books that are most worth reading,” Blane says.

In the process of mentoring with Roger Ridley, Blane says he also learned flexibility. “When you start out, you begin with an A-B-C-D strategy. Then real life hits as the church grows. You need to learn how to adjust your strategy to meet the needs of a growing church,” Blane says.

Chalco Hills Baptist Church has been meeting at a local elementary school, rent free, on Sundays. Blane is grateful for helpers such as Dan Gillespie and Gaylin Jepsen, a couple from the Gretna church who committed to helping with the new church plant. Blane calls them “Priscilla and Aquila helpers” who have worked hard behind the scenes to get the church up and going.

When we arrive at the school at 7:30 on a Sunday morning, Dan is already busy unloading equipment from his SUV. The seats are folded down, and the back is packed with plastic tubs full of equipment. “I just keep the church things in here during the week and unload it on the weekends,” Dan says as he hauls bins into the church.

The next step for the Chalco Hills church is formal organization. Blane is in the process of putting together a statement of beliefs and a value statement. His Bible college and seminary training have prepared him for this, but his former life also influences the process.

“When I was unsaved, I listened to garbage music,” Blane says, explaining how he reacted by setting very conservative standards for himself right after he was saved. “I probably reacted too strongly. I was making some pretty strong decisions, but I was reacting to culture rather than the Bible.”

Blane credits Charles Alber, retired pastor of Campus Baptist, for teaching him to view the Bible as the sole and sufficient authority for all matters of faith.

“Now I try to develop convictions based on the Bible, rather than the culture around me,” Blane says.

Blane hopes that the Chalco Hills church can follow the model of Gretna Baptist-a small, young church committed to planting other churches from the start. His two years of unfruitful deputation taught him that some churches are naturally wired for church planting, and some are not.

Darrell Goemaat is director of photography for Regular Baptist Press. Kevin Mungons is managing editor of the Baptist Bulletin