MEMPHIS, N.Y.---First Baptist Church is meeting in a new home in a new location after a snowstorm destroyed the church’s building in 2011.

MEMPHIS, N.Y.—First Baptist Church is meeting in a new home in a new location after a snowstorm destroyed the church’s building in 2011. An open house for the new facility was held Sat., Nov. 9, with the first church service held the next day.

In February 2011, members were attending a Wednesday night prayer meeting when they “heard popping and cracking and noticed some severe parting of the ceiling sheetrock,” says Pastor Art George. The group evacuated the building, gathering in the parking lot to pray. Twenty minutes later the roof collapsed under the weight of three feet of snow.

The congregation voted to move to a new location four miles away. It partnered with ChurchCare, a ministry of Baptist Church Planters, to build a new one-story, 24,000-square-foot facility on 10 acres of land. The new location, on a main road, is easier for the public to get to, and the additional land allows room for the congregation to grow.

Pastor George says, “For years we had been struggling with limited space, limited parking, people not knowing we even existed, and God really opened up this opportunity for us to access this property.” 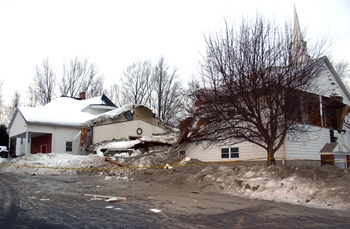 When construction began in 2012, the The Post Standard of Syracuse reported, “At times the work has looked like an old-fashioned barn raising.” Volunteers from First Baptist and sister churches in the area joined the missionary builders in constructing the facility.

As construction was coming to a close this year, members of First Baptist met at the new facility on Sunday afternoon, Oct. 13. Each one was encouraged to inscribe his or her life verse on the floor of the auditorium before the carpet was laid, reminding everyone that the Word of God is the basis for all the church seeks to do and teach.

On Nov. 9, 200 people from the community attended the open house, and 300 attended the first service the next morning— “quite a humbling experience for a congregation that until recently had only seen around 100,” says Pastor George.

The day closed with a presentation of gifts to the final two builders, Brent Howard and Ron Cornell. Brent shared a brief challenge, reminding people of God’s charge to use the building as a tool to serve Him. Everyone then went out into the brisk, windy weather for a presentation of the cornerstone and a prayer of dedication led by ChurchCare Construction Director Howard Fraser. The cornerstone reads, “2013, est. 1815, 1 Peter 2:6,” referring to the verse that says, “Behold, I lay in Zion a chief cornerstone, elect, precious, and he who believes on Him will by no means be put to shame.”

First Baptist now calls three towns its home: the building is physically located in Camillus and has a postal address of Elbridge, but the church has chosen to keep its name as First Baptist Church of Memphis.

The new building includes energy-efficient windows and insulation, radiant heat in the floors, a sanctuary for 270 people, and, says Pastor George, special trusses that can handle the weight of New York snowstorms.