FORT BRAGG, N.C.---Congratulations to Chaplain Jack Stumme on his promotion to lieutenant colonel. 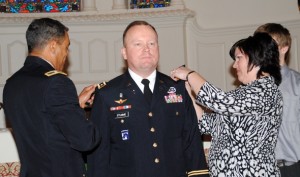 Jack is no stranger to parachutes and to the needs peculiar to the airborne soldiers and their families. Since his jubilant report in 1999 from Fort Bragg—“I have 10 jumps now and am no longer a five-jump chump; airborne!”—most of his assignments have had him jumping out of airplanes. He was assigned to the 1st Battalion 1st Special Forces Group (Airborne) in Okinawa in 2001, and the 1st Special Forces Group (Airborne) out of Fort Lewis, Wash., in 2007, and has been back at Fort Bragg with the XVIII Airborne Corps since 2009. Last year he was deployed to Iraq with the XVIII Airborne Corps.

At the promotion ceremony, Brigadier General Michael X. Garrett, XVIII Airborne Corps chief of staff, remarked that many officers do well with their military responsibilities, some do well with their families, but only a very few do well with both. “Jack Stumme,” the general said, “is one of the very few who do both well.”

“We thank the Lord for the Stumme family and their testimony for the Lord, and agree with General Garrett,” says Chaplain John Murdoch, director of Regular Baptist Chaplaincy Ministries. “Congratulations, Chaplain Stumme, on your promotion. May God continue to use you and your family for His glory. Airborne!”