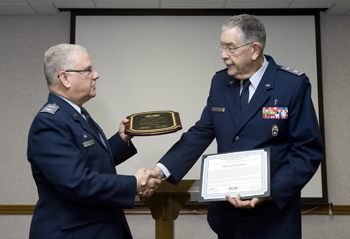 “Retired? I don’t know how to spell the word,” Chaplain Woodard said when visiting the GARBC Ministry Center in May. “I’ll be 75 on Pearl Harbor Day.”

Chaplain Woodard has been active with the Civil Air Patrol for many years and served as its chief of chaplains (2008–2011). Upon completion of his tour as chief, he became the chief emeritus and continued to volunteer as chaplain to the 328th Combat Support Hospital of the U.S. Army Active Reserve, the Army Active Reserve Signal Corps High Tech Training Facility at B. T. Collins Army Reserve Base in Sacramento, Calif., and at Travis Air Force Base. He assisted at funerals, participated in community Memorial Day events, conducted hospital visitation, and counseled airmen. Woodard also served for 18 years as volunteer law enforcement chaplain, eventually becoming a training officer, deputy senior chaplain, and then senior chaplain.

“I’m the poster boy for the Peter Principle,” he says now, implying that he was promoted beyond his ability, a modest claim considering the honors he has received.

The recent award was presented in Gettysburg, Pa., by the MCA’s executive director, Chaplain Robert G. Certain, and its national president, Chaplain Edward T. Brogan. The Military Chaplains Association is an independent advocacy group chartered by congress in 1925, open for personal membership to any chaplain or retired chaplain. John Murdoch, director of Regular Baptist Chaplaincy Ministries, was formerly president of this organization (2004–2006).

Chaplain Woodard joined the Air Force right out of high school, serving until he was 21. He found Christ through the ministry of First Baptist Church of Eastgate, Bellevue, Wash.

“When I was a brand new believer in the church, a guest speaker left a verse with us, Ezekiel 22:30, challenging us to ‘stand in the gap.’ I sensed a call to the ministry and prayed about it a week, then came back to the church and told them how God was leading.” Then Chaplain Woodard recalls his funny departure for Western Baptist Bible College (now Corban College) in 1961.

“I was so ignorant and green. I put everything I owned into my Ford Fairlane and drove down to campus. But I never told them I was coming.”

He still recalls his announcement when arriving on campus: “My name is Whit Woodard and I’m here to go to Bible college,” and adds that “they were gracious to accept me.”

After graduation he served as a church-planting missionary with Fellowship of Baptists for Home Missions, then joined the Civil Air Patrol as a chaplain, where he served from 1967 to ’73 and 1996 to the present. He now holds the title of chief of chaplains emeritus (“means I have nothing left to do,” Woodard says).

As it turns out, he’s stayed busy, writing his doctoral dissertation for Great Plains Baptist Divinity School on the problems that confront the Christian chaplaincy. He’s recently released a book of insights on the Christian chaplaincy, Ministry of Presence. He’s concerned that the chaplaincy sometimes attracts “a lot of people who are wonderful folks and have good instincts, but they are not ministers.” When he was serving with the Civil Air Patrol and responsible to approve chaplains, he noticed that a few recruits were not necessarily serious about ministry. “We had some people who wanted to have ‘chaplain’ on their answering machine,” he says now.

“I believe that the single most serious lack in the US chaplaincy today is a lack of meaningful association with a local church,” says Chaplain Woodard. He and his wife, Nancy, are members of Sierra Baptist Church, Newcastle Calif.

“It is intrinsically true that chaplains are in situations where they must defer to some other authority or agency: the military, the police department, the hospital administration. For that reason it is extremely important for the chaplains to work under the local church’s authority. And in our environment of pluralism it is important to have the local church’s authority over the chaplain’s doctrine.”

What caused him to reach this conclusion?

Looking back on his career, Chaplain Woodard says that he learned important lessons about prayer and personal confession, “being prayed up to date,” as he puts it. “Things happen when they happen, and develop when they develop. You can’t predict what will happen in a chaplain’s day.”

“Prayer is the easiest thing to set aside. Chaplains are action people. I think it is hard for us to be in a more reflective mode, but we need more prayer.”