ARLINGTON, Va.— It’s Thursday, Sept. 27, and about 100 U.S. Army soldiers are seated in an auditorium at Fort Myer, listening to Chaplain Mark Worrell speak on suicide. 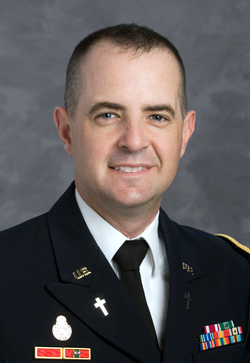 ARLINGTON, Va.— It’s Thursday, Sept. 27, and about 100 U.S. Army soldiers are seated in an auditorium at Fort Myer, listening to Chaplain Mark Worrell speak on suicide. At the same time as Worrell is speaking, U.S. Army troops around the world are pausing to participate in similar efforts as part of the Army’s suicide prevention training.

Suicide statistics in the Army are grim, says NPR. “The Army has been struggling to deal with the suicide problem since numbers began rising in 2004. This year, the average is nearly one soldier suicide a day,” NPR reports.

After completing a tour in Iraq with a cavalry unit from Fort Bliss, Texas, Chaplain Worrell, endorsed by the Regular Baptist Chaplaincy Ministry, began working with the 1st Battalion, 3rd US Infantry Regiment in Arlington, Va., traditionally called The Old Guard. Its members primarily protect Washington, D.C., during a national emergency or civil disturbance.

Worrell’s ministry brings him face-to-face with the pressures of being in the Army. But the pressures that lead to suicide are not limited to soldiers in combat; soldiers based in the U.S. face family pressure, as do those who have not deployed, he says.

Challenges like these have come to the attention of the National Association of Nouthetic Counselors. “The organization has begun offering a military track to speak to post-traumatic stress disorder and other needs as part of its Biblical counseling ministry,” said Chaplain John Murdoch, director of Regular Baptist Chaplaincy Ministry in his article “Chaplains Participate in NANC Conference.” Last fall Worrell participated with Murdoch and two other chaplains in NANC’s annual conference in Walnut Creek, Calif. Addressing the very pressures that soldiers and their families face, Murdoch moderated a panel discussion with the three chaplains on “Ministering to and Counseling Military Families.”

“This year, 2012, there have been more suicides in the Army than combat deaths,” Worrell says. But he ended his training seminar on an encouraging note—by showing a video telling the stories of soldiers who helped others who were contemplating suicide. When soldiers stop to listen to fellow soldiers, when they ask questions and look out for one another, a large portion of suicide prevention has been achieved.