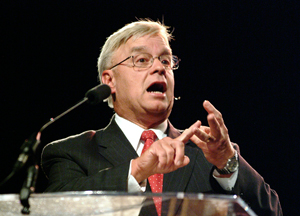 Pastor Quick was well-known for using a quote like this at many of the funeral services he preached, reminding the congregation of First Baptist Church, Elyria, Ohio, that to be absent from the body is to be present with the Lord. At his memorial service, the quote was used of Quick, culminating a life of pastoral service that was cut short, in human terms, by cancer.

Bradley W. Quick, pastor of First Baptist Church, Elyria, Ohio, and past chairman of the GARBC Council of Eighteen, died on Thursday, Aug. 19. He was 63.

He was born on April 18, 1947, in Detroit, Mich. At the age of 11, Pastor Quick accepted Christ’s gift of eternal life and joined Van Dyke Baptist Church, Warren, Mich. He married his high school sweetheart, Debra Gail Vires, on June 20, 1970.

On April 1, 1984, Pastor Quick and his family arrived at First Baptist of Elyria, a historic church that previously had been pastored by GARBC leaders such R. E. Neighbour and Robert T. Ketcham. During his 26-year ministry, church members appreciated Pastor Quick’s faithful preaching ministry and love for each person of his congregation. He led in the construction of a 1,100-seat auditorium, completed in 2002, a project that included a large foyer, new pastoral staff offices, a nursery suite, and several new classrooms.

Mentor to many missionaries and pastors, Quick ministered to people around the world on multiple missions trips. He served on several boards including Baptist Mid-Missions, where he belonged to the executive committee and general council; Faith Baptist Bible College advisory board; and the Council of Eighteen of the GARBC. He chaired the Council of Eighteen in the year prior to his death.

He was a fixture at GARBC conferences, judging the Talents For Christ brass category for 30 years. After serving as host pastor in 2009, he was looking forward to the 2010 Conference, but medical treatments left him too ill to travel.

He loved traveling with his wife, playing with his grandchildren, playing his trumpet, listening to southern gospel music, golfing with “the Kevins,” walking with his daughter, eating all things chocolate, and watching University of Michigan football.

Bradley leaves his loving wife of 40 years, Debra Gail Quick; his children, Kim and Kevin Kerr and their children, Macy and Ellie, of Rochester, Mich.; Kevin and Barbi Quick and their children, Bradley, Peter, and Olivia, of LaGrange; his father, Wilbur Quick, of North Olmsted; and his brothers, Brian Quick of Elyria, and Terry Quick of Ashville, N.C.

He was preceded in death by his mother, Nona Quick, his brother James Quick, and four unborn grandchildren.

Quick enjoyed telling stories of his days playing trumpet on the University of Michigan Marching Band when it was led by William D. Revelli, a conductor famed for his uncompromising standards and regular outbursts. “I’m intolerable when it comes to perfection. Sometimes I’m even downright mean about it,” Revelli would say.

One afternoon on the practice field, Revelli looked down the ranks to see one trumpet player marching in time, but without his music.

“Quick, you’re out of here—you’re out of the band. Permanently!” Revelli roared, incensed that a freshman student would be unprepared for rehearsal.

Later, after the other band members had left, Brad Quick returned to the podium with trumpet in hand. “Dr. Revelli, I was playing my music memorized. Here, let me show you,” Quick said.

He learned that being thrown out of band was a badge of honor among the finest Michigan players, who were quietly readmitted by Revelli later. “Aw, I was never worried about you; it’s the other guys,” Revelli said.

Pastor Brad Quick will be remembered as the man who arrived early, always prepared, with a thoughtful plan carefully in place. He was the sort of leader no one noticed until they looked down the ranks to see the one player who already knew the score. He didn’t need to hold his horn any higher than the rest, and he didn’t need flashy performance mannerisms. He knew the Book.

Quick will be remembered for chairing GARBC conference business meetings where difficult issues were discussed, and was known for treating each perspective with fairness and patience. In an era when fundamentalists argued over the Biblical doctrine of separation—and struggled to understand what Quick called a “quagmire of religious organizations and ministries vying for [our] support”—he offered balanced, centrist answers that summarized what GARBC churches believe.

“Pastors and church leaders need a clear set of standards that will help them make these decisions,” Quick said, offering a solution based on what he called “Taking a Stand in Love.”

John Greening, national representative of the GARBC, wrote the following words of tribute: “The association lost a champion of interchurch cooperation when Pastor Brad Quick went to Heaven to meet the Head of the church, Jesus Christ. As a leader who brought churches together in the local Hebron Fellowship, the state OARBC, and the national GARBC, Brad worked to accomplish the ideals embodied in the motto, ‘Together we can accomplish more.’ Brad, in faithfully fulfilling his ministry roles, was first a pastor who lovingly cared for his church family. But God had given him the capacity to love and care about the health and vitality of other Baptist churches. Last week the GARBC lost a champion who gave himself to make our association stronger. Brad’s laugh, his wisdom, his love for the Savior, and his heart for the church will be missed by all of us who were privileged to be his friends and colleagues in service.”