Bob Gage began and ended his ministry career by living out the words of 2 Timothy 4:2 and 5: “Preach the Word! . . . Do the work of an evangelist.” The recently retired pastor of First Baptist Church, Dunkirk, New York, died Feb. 9 at age 73. 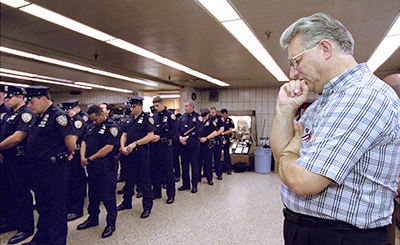 Bob Gage prays with the men and women of New York’s 20th police precinct after 9/11. A commander had asked Bob to talk to his officers.

DUNKIRK, N.Y.—Bob Gage began and ended his ministry career by living out the words of 2 Timothy 4:2 and 5: “Preach the Word! . . . Do the work of an evangelist.” The recently retired pastor of First Baptist Church, Dunkirk, New York, died Feb. 9 at age 73.

Before accepting the pastorate in Dunkirk, Dr. Gage was pastor of Wealthy Park Baptist Church, Grand Rapids; Haven (Florida) Baptist Church; and First Baptist Church, Hackensack, New Jersey; administrator for Haven (Florida) Christian Academy; and founder and president of Hackensack (New Jersey) Christian School. He was also pastor of First Baptist Church in New York City when the terrorist attacks occurred on Sept. 11, 2001. Immediately following the attacks, Gage made his church available to those seeking answers and comfort. “They will be looking for someone or something to fill their emptiness. But only Christ can fill it,” he said.

During the day, signs invited passersby inside the church to pray or speak with a counselor. Tables were set up offering free water, fruit, and gospel literature. And each night, Gage stood on the candlelit steps of First Baptist Church to lead a prayer and song service. “God put us here,” he said. “And we want to use this [tragedy] as an opportunity to reach out to the neighborhood.”

In 2007 Dr. Gage accepted the role of interim pastor at First Baptist Church in Dunkirk and ended up taking on a permanent position as pastor. In July 2014 he was diagnosed with stage 4 peritoneal cancer, but he continued ministering.

Following his diagnosis, he posted the following thoughts on his Facebook page: “The doctor said I had ‘terminal cancer’ which sounds very negative to most people. But it made me think. When I was in college in Philadelphia I went to the 30th Street train station and took the train to Boston’s South Station then made my way to the North Station where I got the train to the Beverly ‘terminal.’ When I got there I was greeted by my mother and father and taken to my home. Just think, ‘terminal’ is a good thing. Soon I will be at my final destination at Heaven’s Terminal and again will be met by my mother and father; but even better by the Lord Jesus my Savior who will take me to the mansion He has prepared for me. If we are resting in God’s promises and realize the reality of our salvation by the grace of God, ‘terminal’ is victory.”

Dr. Gage retired from First Baptist Church on Jan. 18. “But that doesn’t mean I’m retired from preaching,” he said. He planned to return to evangelism, a passion of his that began when he was a high school student in 1955 in Beverly, Massachusetts.

“One Sunday afternoon I heard Charles Fuller of the Old Fashioned Revival Hour preach a message entitled ‘Preach the Word.’ It was there, sometime around three o’clock in the afternoon that God spoke to my heart and God called me to do just that—to preach the Word and do the work of an evangelist.” He started immediately, beginning the America for Christ Evangelistic Association, holding evening services in Beverly area churches, leading Bible clubs, and working with local Youth For Christ rallies. 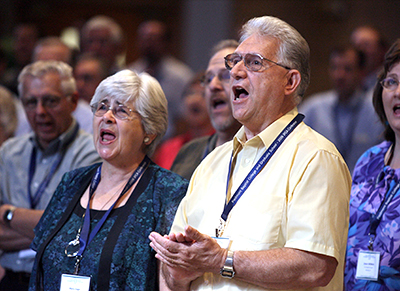 Bob and Mary Gage sing with other attendees at a GARBC Conference.

After leaving Dunkirk, Bob and his wife, Mary, relocated to their Rivendel Retreat Center in Deposit, New York. They had bought the property when Bob was pastor in New York City as a retreat for themselves and eventually for Christian workers and writers. Through his evangelistic ministry called Sword and Shield Ministries, he planned to make himself available for evangelistic rallies, Bible conferences, and church and Christian school consulting.

The Gage family says, “We are so grateful for the many prayers and words of encouragement that have been given for our family and particularly our parents, Bob and Mary Gage. It has been a blessing to see God give him the strength to continue serving the Lord in spite of the cancer and the treatments.”

He is survived by his wife, Mary; his children, Joanna, Jonathan, Judith Frey, Joshua, and Joyous; 11 grandchildren; and five great-grandchildren.