“The Lord’s our Rock, in Him we hide, a Shelter in the time of storm” has been the motto of folks in Wadena, Minn., since an EF-4 tornado devastated residential neighborhoods, displacing 200 families. 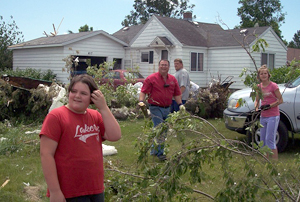 WADENA, Minn.—“The Lord’s our Rock, in Him we hide, a Shelter in the time of storm” has been the motto of folks in Wadena since an EF-4 tornado carved a swath of devastation through several residential neighborhoods, displacing 200 families according to local newspapers. Members of Southbrook Baptist Church have been affected, but they are claiming the promise of Psalm 91:1 and 2: “He who dwells in the shelter of the Most High will abide in the shadow of the Almighty. I will say of the Lord, ’My refuge and my fortress, my God, in whom I trust.’ ”

Kevin and Carol Albertson were at home when the tornado swept down their street, ripping off a large portion of their roof and wrenching exterior walls apart. Carol recounted their view from the haven of their basement; the stairway curtain was sucked up the stairs, they could hear the tornado and damage being done to the house, and then the pink attic insulation blew back down the stairs and swirled in the basement. After the storm had passed, the Albertsons emerged from the basement to find that their living room and kitchen were wide open to the elements, and their neighbor’s garage was parked on their back deck. The Albertsons’ home has been determined a total loss.

The other Southbrook family with severe damage to their home is Rick and Rhonda Schmitz. Rhonda was in the garage when her cell phone rang; the caller was her son, warning her that the news had just reported a tornado approaching their area. Rhonda headed for the basement and was in the stairwell when the storm hit their house, sending debris down the stairwell with enough force to bruise Rhonda’s legs, but she was able to close the basement door and escape the brunt of the force. Their house sustained the loss of its roof and some walls being twisted off their footings.

Several other families’ homes experienced damage of some sort—siding, shingles, windows. At the Heppners’ home, a large tree fell and totaled one car, and four trees fell on their house, damaging the roof, windows, doors, furniture, and flooring.

In the aftermath, God has provided many wonderful opportunities to minister to each other and to the community. The town has experienced God’s providence and protection, seeing the chaos and widespread destruction and hearing that no one died. Many stories are similar to the Albertsons’ and Schmitzes’ accounts—people who were saved from the storm by bare moments. These spiritually sensitive times have paved the way for many in GARBC churches to spread the unique love and compassion of Christ to neighbors in reflection of Psalm 37:3: “Trust in the Lord, and do good.”