Russell Doughten, Producer of A Thief in the Night

CARLISLE, Iowa---A generation of teenagers first met Russell Doughten Jr. while sitting on the floor of their church basement, watching his film A Thief in the Night.. Doughten, 86, died Aug. 19. 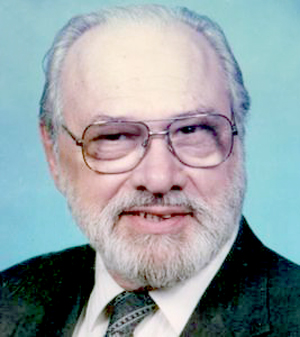 CARLISLE, Iowa—A generation of teenagers first met Russell Doughten Jr. while sitting on the floor of their church basement, watching his film A Thief in the Night. Forty years later, most of them still remember the experience as intense and even frightening.
“People generally have one of two reactions to the prophecy films,” Doughten once told a researcher. “Either people are scared to death and tell themselves it isn’t real, or they say, ‘Forget it, nothing like that could ever be.’ But the Bible is true, and this is what the Bible says.” Russell S. Doughten Jr. died on Aug. 19 at his home in Carlisle. He was 86. He grew up in Woolstock, Iowa, the third of eight children born to Russell Samuel Doughten Sr. and Dorothy Woods Doughten. He graduated from Chester (Iowa) High School in 1945, then served in the U.S. Navy for 17 months. Doughten returned to Iowa to attend Drake University, graduating as a drama major in 1949. There he met his wife, Gertrude Sprague, when they both worked in the girls’ dormitory dining hall. They were married on July 2, 1950. Doughten taught English at Williamsburg (Iowa) High School for two years, then moved to New Haven, Conn., to study at Yale Drama School, where he earned an MA in 1954. After graduation, he moved to Chester Springs, Pa., where he worked with Good News Productions, a Christian film company operated by Irvin S. “Shorty” Yeaworth Jr., who also produced independent films for Hollywood distribution. In addition to many Christian films, the two worked together on The Blob, having recruited Steve McQueen for his first feature film. Doughten was credited as producer, but also directed many of the scenes. The Pennsylvania years also rekindled his interest in Bible study. “When I was a young Christian, I was frightened of the prophecies in Scripture,” he said in an interview. “They seemed so remote to me. I could only look at them as figurative. I didn’t have the inner strength to consider that these things were absolutely true. But after I’d been a Christian three or four years, I began to get drawn into those things, and I began to look into the prophetic writings and decided that if the Lord is really sincere about these things, then what’s coming is absolutely staggering.” 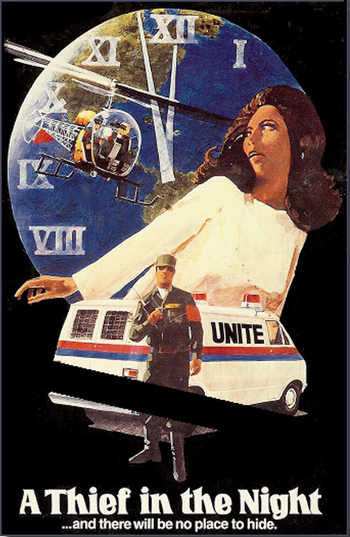 The Doughtens returned to Iowa to create a new film company, Heartland Productions. In 1972 he formed Mark IV Pictures with Donald Thompson, the production company that would release A Thief in the Night in 1973. Soon after, he met Manfred Kober, a systematic theology professor at Faith Baptist Bible College who had seen the film, liked it, but noted a few concerns. “I wouldn’t have used the Matthew 24 passage, that’s referring to the judgment at the end of the tribulation,” Kober says now. Russ Doughten accepted the criticism generously; he ended up hiring Kober as a technical adviser for the rest of his films, including A Distant Thunder, Image of the Beast, and The Prodigal Planet. And Doughten enrolled as a part-time student at Faith, taking Kober’s theology classes. With a ThD from Dallas Theological Seminary, Dr. Kober had an ongoing interest in illustrating Bible chronology. He eventually introduced Doughten to Evan Meyer, a Central Iowa artist who had painted a gigantic end-times chart for Richard Mohr, pastor of Airport Baptist Church in Des Moines. This was the chart featured in the final three prophecy films. Growing a long white beard to play the recurring role of Rev. Matthew Turner, Doughten used the charts to teach the book of Revelation as a literal account of coming events. Kober remembers his former student as “a very spiritual man. He spent hours studying the Bible each week. And he bemoaned the fact that modern Christian filmmakers did not care about the gospel.” As Christian films moved out of the church basements and into mainstream distribution, many producers were disenfranchised with “preachy” films and salvation appeals. Instead, they favored “redemptive narratives” that suggested but did not overtly declare the claims of Christ. To Doughten’s way of thinking, this left viewers with an entertaining story but did not challenge them with a spiritual decision. “He’s very consistent,” Kober says. “In most of his films he has three gospel presentations, showing how individuals engage the intellect, the emotions, and the will.” The growing tension between “suggest” and “declare” would be noted by media researchers. “I have found that A Thief in the Night is the only evangelical film that viewers cite directly and repeatedly as provoking a conversion experience,” says Heather Hendershoot, associate professor in the media studies department at Queens College, City University of New York. And Doughten free acknowledged the possible consequences of producing Christian films that depicted scary events. “Anybody who seriously reads the prophetic books or Revelation or Thessalonians or even Matthew 24 will be scared,” he told Hendershoot. “There’s some pretty heavy stuff in those prophecies. This is not for kindergarten. It’s for those who are into the meat of the gospel. If you take seriously what is being said there, it’s frightening.” At the height of its popularity, seven hundred prints of A Thief in the Night were in distribution. The film had grossed $4.2 million by 1984, earned with a business plan that ran counter to Hollywood norms. Doughten would later estimate that 300 million people saw Thief, but most people watched it for free at church events. His income came from the modest fee he charged for film rentals. Later he began releasing the films on VHS tape, then DVD. Doughten started a nonprofit venture known as Mustard Seed International, creating translations and subtitles of his films so they could be used by missionaries. Under Mustard Seed’s sponsorship, Doughten and Kober would host 40 study tours to the Holy Land. As the Christian film industry grew in the 1970s, Doughten was influential in creating two trade groups, the Christian Film Distributors Association and the Christian Film Producers Association. He was a member of the National Religious Broadcasters Association, creating its annual award for Outstanding Evangelistic Film Maker. In 2001 he received the NRB Milestone Award for 50 years of service. Back home, his Iowa fans would cheer when the opening credits announced “Filmed on Location in Iowa,” where Doughten produced nearly all of his films. Everyone remembered the famed A Thief in the Night sequence at Red Rock Dam, but local residents could also identify the streets of Des Moines, the midway at the Iowa State Fair, and various church auditoriums he borrowed for interior scenes. Insiders might also recognize Faith Baptist Bible College students who worked as extras in crowd scenes, or perhaps Pastor Ezell Wiggins of True Bible Baptist Church, who played an inner-city pastor in Nite Sounds. Russ and Gertrude Doughten faithfully attended Missionary Baptist Church in Carlisle for many years, where the funeral will be held on Saturday, Aug. 24. Doughten is survived by his wife, Gertrude; three sons, Paul, Joel, and Tim; four grandchildren; and five great-grandchildren. He was preceded in death by his son Mark, who died as an infant, and a grandchild. Russell S. Doughten Jr. kept his white beard long, hoping that he could once more play the role of Rev. Matthew Turner, who had not yet reached the end of his prophecy chart. As late as 2007 Doughten was still trying to arrange financing for The Battle of Armageddon, what would have been the fifth and final film in his prophecy series. Doughten continued to embrace the narrative potential of end-time events. Looking back on his life, he told a researcher, “We put a story around it in order to reveal those things to modern audiences, but the prophecy is true.”
Posted in Miscellaneous on September 8, 2013.