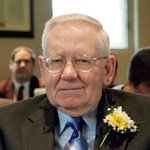 CLARKS SUMMIT, Pa.—Richard Engle, retired professor of Old Testament, Languages, and Literature at Baptist Bible Seminary, died March 9. He taught at Baptist Bible College and Seminary for 35 years before retiring in 2006. He was a graduate of Baptist Bible Seminary (ThB), Dallas Theological Seminary (ThM), and Grace Theological Seminary (ThD). Dr. Rod Decker, professor of Greek and New Testament at BBS, was a student of Engle’s and his student assistant and grader. In the preface to his forthcoming book Reading Koine Greek, Decker writes, “Though he was not one of my language teachers, Dr. Richard Engle is one of the chief reasons why I persevered in Greek. He came to the classroom after ten years of pastoral ministry. In his theology and Bible classes I saw a blend of the biblical languages, theology, and ministry. “He later became a Hebrew professor in seminary, but in his undergrad classes he convinced me that if I was serious about Scripture, I had to be serious about the biblical languages; I could not get by with lip service to the original text. He not only taught it, he modeled it. “Dick’s example guided my attempt at a similar integration for the dozen years I spent in the pastorate and is the vision that I now try to communicate to my students who aspire to pastoral ministry.” Richard is survived by his wife, Barb.
Posted in Miscellaneous on March 17, 2014.