Passing the Baton in Germany 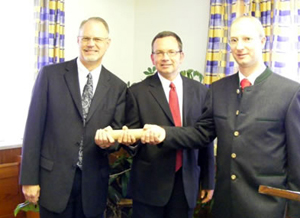 BAD HEILBRUNN, Germany—July 20 was graduation day for Maranatha Independent Baptist Church, nestled at the foot of the Bavarian Alps in the heart of Roman Catholic territory, with missionary Todd Daily passing the baton to Pastor Joachim Armbruster.

Maranatha Independent Baptist Church took its name from the camp formerly held on the property where the church meets. For 34 years hundreds of campers came under the teaching of God’s Word at Camp Maranatha. Many were saved, discipled, and encouraged in their walk with the Lord.

With the closing of the camp, the property became available for holding Bible studies and then church services. In 1991 a group put together a constitution and was organized as a local Baptist church. Baptist Mid-Missions missionaries served at the church, praying for the day when it would be under the leadership of a German pastor.

In 2002 Todd Daily arrived to train Joachim Armbruster and prepare the church for independence. Pastor Armbruster was installed as pastor in November 2008, and the church became a legally recognized body in December 2009.

Pastor Don Michaelsen from Slater Baptist Church, Slater, Iowa, Todd and Dawn Daily’s sending church, spoke at the June graduation service. He referred to graduation as “the day when the training wheels come off.” He said the ride may be kind of uncertain at first, and there may be a few more bumps and bruises along the way, but the Lord will help the church do His work.

Pastor Michaelsen passed the baton to Todd, who encouraged the church from Joshua 1 to be bold by holding fast to the Word of God. Todd then passed the baton to Pastor Armbruster, who took the opportunity to thank Slater Baptist Church and the many other churches that have supported missionaries. In his challenge from the Word, he encouraged the church to look forward to the great things God can do through them.

After a year of furlough, the Dailys will return to Ingolstadt, Germany, to a church in which they worked for nine years. This church, under the leadership of Pastor Christoph Rüttgers, desires to start a daughter church in the next five years. Todd will work with a team of men to disciple them for leadership and teaching positions in both the current church and the church plant.