CLARKS SUMMIT, Pa.—The picnic on Wednesday night was no surprise, being part of a long tradition at the GARBC Conference. Guests were served from a large tent on the lawn in front of BBC’s Phelps Student Center. There was plenty to eat, but the real purpose was to foster connections between pastors and church members [...] 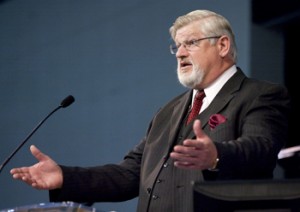 CLARKS SUMMIT, Pa.—The picnic on Wednesday night was no surprise, being part of a long tradition at the GARBC Conference. Guests were served from a large tent on the lawn in front of BBC’s Phelps Student Center. There was plenty to eat, but the real purpose was to foster connections between pastors and church members who have travelled from all over the country to attend the event.

In the old days, the GARBC Conference was held at conference grounds in places like Winona Lake and Ocean Grove. Part of the idea was to encourage informal relationships in between the services and workshops. The same idea is alive today, though the setting is different.

In the old days, guest could usually count on going home with one or two new songs, introduced from paperback books sold in the back of the auditorium. Today the song lyrics appear on an overhead screen, but the idea is the same. In the morning sessions, Nathan Pierpont led the worship from the piano, singing old hymns mixed with newer songs such as “You’re Worthy of My Praise” and “O Church Arise.” In the evening service, Ken Pyne has introduced “We Are God’s People,” perhaps new to many who attend, as well as songs like “Before the Throne of God” and “Let It Be Said of Us.”

Throughout the week, John Greening had been announcing GARBC Service Awards to honor faithful servants who have served with distinction in their GARBC churches. On Wednesday night, he had the opportunity to honor his own mother, Iva Green, who at 99 continues to minister at Great Commission Baptist Church, Schaumburg, Ill. As she stood on the platform with her extended family, John Greening told how she continued to minister, even after her husband’s death in 1994.

Her grandson, Scott, is the church planting pastor of Great Commission Baptist. “Our church will owe a debt of gratitude to Iva for her pivotal role in creating a culture that welcomes, loves, cares for, and prays with guests, attendees, and members,” he says. “I know that when Iva is at church, . . . everyone who walks through the door will feel the love of God.”

The morning workshop sessions featured diverse topics such as Kevin Bauder’s “Alcohol and the Church,” Joy Angela’s “Adusting to a New Everything,” and Ken Davis’ “Reaching our Cities for Christ.” Other speakers addressed church conflict, the Lord’s Supper, and the changing church.

Earlier in the day, John Murdoch introduced several men and women who minister with the Regular Baptist Chaplaincy Ministry. He explained how the chaplaincy has expanded beyond the military to include institutional and community service chaplains. As a result, the GARBC now has chaplains in police departments, fire departments, hospitals, nursing homes, jails, and athletic teams.

The GARBC endorses women chaplains—not so surprising, as long as you understand the nature of their ministry. While the GARBC is in the process of changing their doctrinal statement to clarify how churches are led only by male pastors and deacons, the group also affirms a wide variety of ministries for women. For instance, Chaplain Pam Russell is endorsed by the GARBC to minister to female inmates in the Howard County Criminal Justice Center, Kokomo, Ind. Her endorsement allows her to carry on an effective ministry in a place where men would never have access.