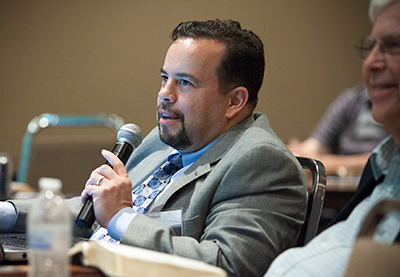 CLARKS SUMMIT, Pa. The Council on Dispensational Hermeneutics met on the campus of Baptist Bible Seminary, Clarks Summit, Pennsylvania. The council’s stated purpose is “to add academic weight and credibility to the effort to keep objective interpretation of scripture at the forefront of modern biblical presentation in churches and academia.” Papers presented at this year’s meeting on September 16–17 addressed the relationship between Israel and the Church, a very important subject to dispensationalists. “The distinction [between Israel and the Church] is, as [Charles] Ryrie noted long ago, the essence of the dispensational approach to Scripture” said Mike Stallard, moderator of the council and dean of Baptist Bible Seminary, during his presentation on Wednesday.

While all of the speakers affirmed the distinction between Israel and the Church, several presentations introduced emphases that have typically received little attention in dispensational circles. Stallard’s paper, “What Do Israel and the Church Share from a Traditional Dispensational Viewpoint?” focused on points of commonality between the two entities. Stallard argues that we should not improperly intensify the distinction between Israel and the Church since the two entities share the same God, the same salvation, certain common elements of purpose, and participation in the coming millennial kingdom. Mark Soto’s paper, “The People of God in Hebrews 12:23: Continuity or Discontinuity?” addressed a rarely-discussed third category: the nations, that group of redeemed individuals who seem to exist alongside Israel and the Church in Revelation 21 and 22 but do not belong to either group. Clearly, the Council on Dispensational Hermeneutics is engaged in breaking new ground rather than just rehashing worn out material from the bygone glory days of dispensationalism.

Since the GARBC is committed to dispensational theology, it has sent representatives to most of the council session since the inaugural meeting in 2008. This year the association’s participation was particularly notable as Regular Baptist Press’s editorial director of publications, David Gunn, presented a paper entitled “Two Problem Passages on Israel and the Church for Traditional Dispensationalists.” Gunn is a member of the council and a PhD student at Baptist Bible Seminary. His paper grappled with the two texts most commonly cited as prooftexts for replacement theology, Romans 9:6 and Galatians 6:16.

The papers presented this year will be made available online in mid-October. The 2016 and 2017 council meetings will focus on the other two essential elements that Ryrie identified as central to dispensationalism: the consistently literal interpretation of Scripture and the glory of God as the underlying purpose and unifying theme of history.