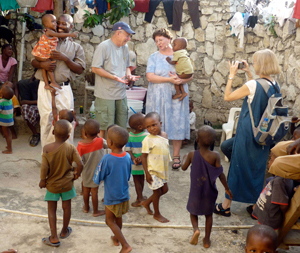 PORT AU PRINCE, Haiti—Seven employees at the GARBC ministry center have just returned from a missions trip to Haiti, led by Chris Hindal, director of GARBC International Ministries. “God did some awesome things during the trip, and I grew to appreciate each one of the group members.” Christ Hindal says. Group members included Seth Olson (production artist), Linda Piepenbrink (editor), Jonathan Norris (marketing project coordinator), Jason LaBombard (webmaster and designer), Jennie Benson (assistant editor), Jonita Barram (copy editor). Each person raised about $1000 prior to the trip, donated by local churches, family, and coworkers at the GARBC ministry center in Schuamburg, Ill. Back home, the group spends their day developing and marketing church educational ministries for Regular Baptist Press. After an earlier visit to Haiti by Hindal and photography director Darrell Goemaat, several of the ministry center employees became burdened for the Haitian churches, and asked for permission to plan an additional trip. Many of the trip details were coordinated by Pastor Prédestin Hérard, president of the Association des Énglises Evangeliques Baptistes d΄ Haiti. In addition to serving as a local pastor, he also directs three orphanages sponsored by Wordsower International. RBP editor Linda Piepenbrink calls Pastor Hérard “a man with an infectious smile and a big responsibility.” The mission group presented Bible lessons for children and women’s groups, sang songs, performed pantomime skits, and played games at the three orphanages they visited. Wordsower founder Jason Nightingale wants to duplicate that model ten times in Haiti. “Through these children God will affect the nation of Haiti for His glory,” Jason writes at www.wordsower.org.

Jonathan Norris and Seth Olson at a tent camp

The RBP group also toured Mission of Hope for Haiti, a large Christian organization where Chris Hindal’s son in law, Bob King, headed up food distribution after the earthquake. “In the first month after the quake, they distributed more meals than the United Nations did,” Hindal says. The mission includes a hospital, chapel area, prosthetics clinic, school, water well, orphanages, and dorms for volunteer teams. Jay Cherry, one of the mission workers, explains that the key to Haiti is “life transformation through Jesus.” The RBP quickly learned to rely on the support of the Haitian believers when struggling with  language barriers, schedule changes, and vehicle breakdowns. “A Western, affluent mindset could easily take issue with the brokenness of Haiti’s infrastructure,” says RBP web designer Jason LaBombard. “But the Lord opened my eyes to the strength of community and the beauty of the Bride in Haiti. Time and time again, the network of believers and not-yet-believers alike who were connected to Pastor Predestin responded immediately and selflessly. And I was the beneficiary of their care.”

Jennie Benson, associate editor for RBP youth curriculum, immediately noticed the generosity, faith, and strength of the Haitian believers. “Those whom we were privileged to meet have not abandoned God or become angry with Him,” Jennie says. “Rather, they meet more often together (some every night) for prayer and singing. Haitians LOVE to sing! One group told us they sing for an hour and a half every night. The joy on their faces and in their hearts spills over into every conversation.”