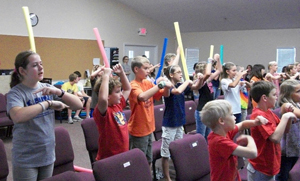 WINTER HAVEN, Fla.—Five teens sat around a lunch table at Faith Baptist Church during a break between rehearsals for the performance of The Slingshot Heard ‘Round the World. Too old to be in the musical, Joshua Leonard, Ethan Mulford, Josh Baker, and Jonathan Fielder helped with the technical side of the production. Stephen Simpson, the director, says, “Music camp has really turned out to be an opportunity to train workers. Usually it ends up being teenagers. They run all of that stuff—all of the lights, all of the sound. We videotape the production. So we end up with a lot of training.”

Josh Baker, camera operator, says, “It’s fun. It’s rewarding. You get to learn a little bit more about the gospel. It’s also a really great reminder about how God works through people and changes lives every day.” The lone female at the table, Courtney Love, helped wherever she was asked. Thinking back over the week, she says, “The kids sound a lot better today and are looking forward to presenting the gospel Sunday night to everyone in church.”

But it’s not just the teens who work at music camp. The drama director, Reagan Osborne, studies at a local college. And Rebekah Leonard is home from college for the summer. Rebekah worked with the actors, “helping them learn their lines, helping them block their scenes, and then helping out backstage.” She especially worked with Abe Hill, seven, who played David. Rebekah says, “I’ve been helping him get more emotion into his lines.” She says it’s rewarding to watch the kids have fun and get into character. “They know why they’re doing it, because we’ve really stressed that to them—it’s to portray the gospel to people who don’t know about Christ.”

Other adults were involved, too, including Jill Foster, choir director, and Mary Nance, choreographer and drill team director. The production was as excellent as Stephen Simpson had hoped, and the audience of families, friends, church members, and even unsaved visitors appreciated the hard work, creativity, talent, and message of The Slingshot Heard ‘Round the World.