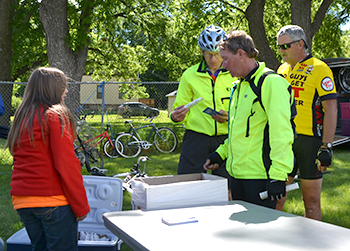 MARSHALL, Minn.—First Baptist Church used the Bike MS ride through Minnesota to establish and strengthen community connections that would pave the way to effectively communicate the gospel.

Over the span of five days, 700–900 cyclists biked roughly 600 miles in Bike MS: TRAM (The Ride Across Minnesota), sponsored by the Upper Midwest Chapter of the National Multiple Sclerosis Society. Pastor Greg Linscott found out several months before the event that the route would take riders within a few hundred yards of the church. He had seen the opportunities Iowa churches had seized in similar settings, and began to explore how the Marshall church could connect with the ride.

Through a relationship he had established with a local bicycle shop, he was able to get regular updates on the specific plans for TRAM as it would come through the area.

Eventually, through that same connection, Linscott was able to connect directly with the TRAM organizers. Arrangements were made for Marshall church members to serve alongside TRAM volunteers at an official water stop in nearby Lynd. The congregation purchased individually wrapped ice-cream treats, which they distributed to the riders and volunteers, accompanied by gospel tracts. The setting provided several opportunities for conversation and evangelistic interaction, and the riders were appreciative of and receptive to the acts of generosity.

Members who volunteered were encouraged by the reception their acts were met with. The setting allowed people with different personalities to engage others with the gospel. Children worked alongside retirees and learned as they heard experienced believers share their faith in Christ. While many of the riders reached were from outside the Marshall area, the process of planning and involvement strengthened the presence of the congregation in the community.

“We rejoice that the gospel was proclaimed, believers were encouraged and taught to serve, and that the reputation of our Savior was enhanced,” says Pastor Linscott.