November 30, 1938. Surrounded by a throng of his fellow countrymen, a triumphant Neville Chamberlain held aloft a historic peace agreement. 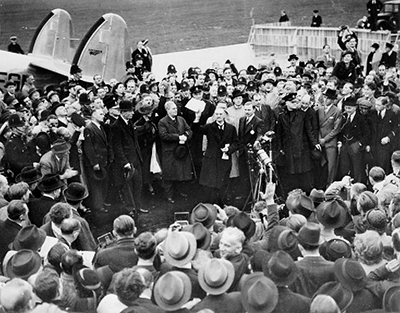 November 30, 1938. Surrounded by a throng of his fellow countrymen, a triumphant Neville Chamberlain held aloft a historic peace agreement. “This morning I had another talk with the German chancellor, Herr Hitler. And here is the paper which bears his name upon it as well as mine,” Chamberlain announced. Reading from the agreement, he continued: “We regard the agreement signed last night and the Anglo-German Naval Agreement as symbolic of the desire of our two peoples never to go to war with one another again.”

The crowd erupted with applause and cheering. The specter of looming war, it seemed, had been soundly defeated by cool-headed diplomacy. England rejoiced. In what must now be regarded as one of the most darkly ironic statements of the twentieth century, King George hailed Chamberlain’s agreement as a prelude to global peace: “After the magnificent efforts of the Prime Minister in the cause of peace it is my fervent hope that a new era of friendship and prosperity may be dawning among the peoples of the world.” One year later, the world found itself gripped by the costliest, most devastating war it had ever seen. Chamberlain’s policy of appeasement had failed dismally. Winston Churchill’s stinging appraisal is memorable: “England has been offered a choice between war and shame. She has chosen shame, and will get war.”

It has often been said that those who forget history are doomed to repeat it. On July 14, 2015, a coalition of international diplomats signed a nuclear agreement with the Islamic Republic of Iran, the world’s leading state sponsor of terrorism. In Chamberlain-esque fashion, President Obama waxed triumphant: “Today after two years of negotiation the United States together with the international community has achieved something that decades of animosity has not: a comprehensive long-term deal with Iran that will prevent it from obtaining a nuclear weapon.”

Time will tell. Criticism of the agreement has already been loud and biting. Some have mocked the agreement’s convoluted and inefficient enforcement mechanisms. Others have questioned the wisdom of the United States approving a deal that fails to secure the release of all four American hostages currently held by Iran. These and other concerns will continue to be aired for days to come. Most of them are interesting and seem to be warranted, but I will leave those discussions to the political pundits and commentators. For the purposes of this post, my interests are primarily theological.

The prospect of a nuclear Iran may strike occasional angst into the American hearts, but to our Israeli friends it is an existential threat of Hitlerian proportions. Transparently, Iran’s acceptance of this deal is unaccompanied by any official policy change with regard to Israel. The Islamic state still refuses to acknowledge Israel as a legitimate nation and pledges to destroy her by any means possible. Just last March, as negotiations over the nuclear deal entered their fifteenth month, Mohammad Reza Naqdi, commander of Iran’s Basij militia, openly declared that “erasing Israel off the map” is “non-negotiable.” Even more telling, just days before the nuclear agreement was signed, Iranian President Hassan Rouhani attended an Al-Quds Day demonstration at which Iranians burned American and Israeli flags and chanted “Death to America” and “Death to Israel.” That the United States is willing to negotiate with those who wish her harm is suicidal. That she is willing to negotiate with the would-be instigators of another Jewish holocaust is unconscionable.

A theological principle embedded in the Abrahamic Covenant should give us cause to tremble. Millennia ago, the creator of heaven and earth promised the forebear of the Jewish people, “I will make you a great nation; I will bless you and make your name great” (Gen. 12:2). In the same breath He also said, “I will bless those who bless you, and I will curse him who curses you” (Gen. 12:3).

There can be no doubt that America’s participation in this nuclear deal is a slap in the face to Israel—or perhaps knife in the back would be a more apropos metaphor. Of course, what does America care? The world’s greatest superpower need not fear the wrath of Benjamin Netanyahu. But it should fear the wrath of Israel’s God, and He has promised a curse on those who dishonor His chosen people. “Silly stories and ancient legends,” some will say. They are not the first to do so: 3,400 years ago, Pharaoh Amenhotep II ruled the world’s greatest superpower. Faced with the fiery ultimatums of a Hebrew prophet, he famously jested, “Who is the Lord, that I should obey His voice?” (Exod. 5:2). The answer was swift, devastating, and apocalyptic. Ten plagues later, Egypt was decimated.

All’s Fair in Love and War

In evaluating Iran’s intentions with respect to this deal, it is altogether appropriate to consider Islam’s ethical teachings on honesty and deceit. At first glance, Islamic theology seems overwhelmingly to extoll—indeed, to require—truth telling on the part of its adherents (Surah 2:42; 8:8; 17:81). But, as is so often the case, the whole truth is somewhat more complex. Muhammad famously permitted Muslims to lie to others in three instances: to reconcile quarreling parties, to ease domestic tensions with one’s wife, and in matters of war (Sahih Muslim, 6303–6305). This principle dovetails well with the Qur’anic teaching in Surah 3:28: “Let not the believers [Muslims] take for friends or helpers unbelievers [non-Muslims] rather than believers: if any do that, in nothing will there be help from Allah: except by way of precaution, that ye may guard yourselves from them.”

In other words, there is precedent in Islamic theology for Muslims to lie to non-Muslims in order to gain the upper hand over them, especially in a wartime context. Imam Abu Hamid Ghazali expresses the principle this way: “Whether the purpose is war, settling a disagreement, or gaining sympathy of a victim legally entitled to retaliate against one so that he will forbear to do so; it is not unlawful to lie when any of these aims can be attained through lying.”[1] This should come as no surprise. The Qur’an depicts Allah himself as the “best of schemers” (Surah 3:54) and the “best of plotters” (Surah 8:30); why shouldn’t his followers seek to emulate him in this regard?

In light of these teachings, it would surely be naïve for any nation to expect that Iran will comply wholeheartedly with the spirit and letter of this (or any other) agreement. “Trust but verify” seems a sensible enough approach to foreign policy, but only when some measure of good faith can be assumed at the outset. Absent that, trust can’t even get off the ground.

I want to be very careful here. “Newspaper exegesis,” the practice of combing through the newspaper trying to find events that might sync up with details of Biblical eschatology, is typically an abusive and sensationalistic practice. I certainly don’t want to be guilty of dogmatically reading current events into Biblical prophecies, or of suggesting that we can somehow calculate the nearness of the eschaton by observing geopolitical patterns and movements today. Perhaps Jesus will tarry another 500 years; who are we to insist otherwise?

That being said, as a dispensational premillennialist, I must confess that Iran’s geopolitical activities hold more than merely passing interest for me. Ezekiel 38 and 39 prophesy of an eschatological engagement involving Russia, Iran, Israel, and an assortment of other nations. It’s an event often referred to as the “Battle of Gog and Magog,” and many scholars believe it could take place before the beginning of the tribulation—maybe even before the rapture of the church. (In fairness, not all premillennialists agree on the specific timing of this event. Some place it either at the middle or end of the tribulation, and a few have even pushed it as far back as the end of the millennium. But the overwhelming majority sees it as tribulational, and there is a broad consensus today that it will take place either just before or just after the tribulation’s onset.)

As Ezekiel describes it, this conflict begins when a multinational coalition decides to invade and plunder Israel. The coalition’s armies descend on the Promised Land like a swarm of locusts, and no one is there to intervene on Israel’s behalf. No one, that is, but her God. In a spectacular display of divine might and fury, the Lord Himself destroys the aggressors: “And I will bring him [Gog, the coalition leader] to judgment with pestilence and bloodshed; I will rain down on him, on his troops, and on the many peoples who are with him, flooding rain, great hailstones, fire, and brimstone. Thus I will magnify Myself and sanctify Myself, and I will be known in the eyes of many nations. Then they shall know that I am the Lord” (Ezek. 38:22, 23).

Now again, I wouldn’t dare to presume that the fulfillment of this prophecy must be just around the corner. Nevertheless, Iran’s current posturing does cause one to wonder. About a decade ago, many premillennialists raised their eyebrows at the blossoming of a cozy diplomatic relationship between Vladimir Putin and Mahmoud Ahmadinejad. Could this be setting the stage for the fulfillment of Bible prophecy? many of us wondered. And perhaps it was. Today, as a result of this nuclear agreement, economic sanctions against Iran have been lifted and she has been granted a cash infusion to the tune of $2.8 billion. Quite plausibly, Iran’s newfound funds and freedom to pursue aggressive militarization, and America’s increasingly flippant attitude toward Israel, might also fit into an eschatological framework.

These are strange days. With so much turmoil, uncertainty, and unrest in the world, the need for the church to speak truth, refute error, and evangelize the lost has never been more urgent. May we endeavor to put God first in all things as we seek to live in and reach out to a world gone mad. Even so, come, Lord Jesus.

Next post Theological Reflections on the Iranian Nuclear Agreement