God Will Fix This!

On Dec. 3 the New York Daily News published the headline “God Isn’t Fixing This” in response to the outpouring of prayer support for the victims of the San Bernardino shootings. So how should we think about this from a Biblically informed worldview? 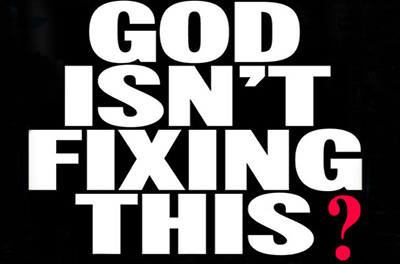 On Dec. 3 the New York Daily News published the headline “God Isn’t Fixing This” in response to the outpouring of prayer support for the victims of the San Bernardino shootings. The article behind the headline attempts to disparage the expression of prayer support for the victims while giving favorable attention to those who favor a fix via gun laws. For example, Democratic Senator Chris Murphy tweeted soon after this horrible event, “Your thoughts should be about steps to take to stop this carnage. Your prayers should be about forgiveness if you do nothing again.”

So how should we think about this from a Biblically informed worldview? Is God not fixing this? In a limited way, I would like to offer a Biblical text to consider in response to this event, specifically this New York Daily News headline. It comes from Isaiah 7—9.

The historical circumstance was a highly stressful situation for Ahaz, the king of Judah. At the time, the Assyrian King Tiglath-Pilesar III was in power. His kingdom and his influence were intimidating. His agenda included reaching across the Fertile Crescent down through Israel into Egypt. A resistance coalition was formed by Rezin, king of Syria, and Pekah, king of Israel, to tear apart Judah, dethrone Ahaz, and replace him with Tabeel from Tyre.

According to the Biblical narrative, Ahaz had two options. First, he could embrace the Lord’s counsel from the prophet Isaiah. The Lord revealed to Ahaz that Rezin and Pekah would not succeed with their plot. In addition, the Lord offered Ahaz an affirming sign, the virgin birth of a child named Immanuel (Isa. 7:14). The second option involved King Ahaz submitting himself to Tiglath-Pilesar III in exchange for his protection against the Syria-Israel resistance coalition. Ahaz chose to submit to the Assyrian king.

The interesting thing about this passage in light of the New York Daily News headline is that God was fixing the situation for Ahaz through the word of Isaiah the prophet. However, in the fog of the crisis, Ahaz chose not to embrace that word of promise issued to him wrapped in the birth of a coming child called Immanuel in 7:14 and then called Wonderful Counselor, Mighty God, Everlasting Father, and Prince of Peace in 9:6. The fix that God promised to Ahaz was not only for him but for all of us and for every season of life. This promised Child was born, was crucified, defeated death by means of resurrection, and will return to establish His Kingdom of righteousness, justice, and peace.

We all live through seasons when we wonder if God hears us or if He will fix the immediate mess or crisis before us. However, Biblical faith calls us to a long view that sincerely trusts the Word of God and that waits for God to act. We are promised strength in this long view. We have the benefit of a completed canon of Scripture that preserves a record of God’s people who embraced long views associated with words of promise and words of warning. Finally, do not overlook that the beautifully and powerfully named Child in Isaiah 9:6 is the one Whose government and peace will have no end (Isa. 9:7). God is fixing and will fix this!

Posted in Commentary, Culture on December 8, 2015.