What does Christ teach us about suffering? How does He help us? 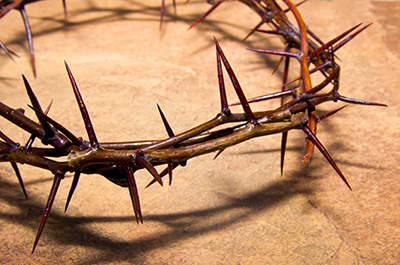 I think nearly all of us have a vision in our minds of how our lives will turn out, a plan that seems best in our own thinking. It doesn’t take much, however, to remind us on a regular basis that we control very little in this world in which we live.

Recently a young woman’s situation captured our sympathy for that very reason. Brittany Maynard was a 29-year-old newlywed who earlier this year was diagnosed with a stage 4 glioblastoma and given six months to live. I am quite sure that is not how she imagined the first few years of her married life.

Brittany and her husband, Dan Diaz, moved from San Francisco to Oregon, one of only five states that have death-with-dignity laws. Brittany wanted to be able to choose how she would die after hearing from her doctors what would happen to her body in the final stages of her illness. She said, “I can’t even tell you the amount of relief that it provided me to know that I don’t have to die the way it’s been described to me.” She planned to take her own life on Nov. 1, 2014.

After her situation became public, she indicated that she might delay those plans, but ultimately she followed through and took her own life on Nov. 1. Brittany spent some of her last days lobbying lawmakers in other states to pass legislation that would allow people to choose how they die.

Brittany found herself in a very difficult situation and wanted to stay in control as much as possible. Most of us can certainly identify with that desire. In fact, I think it could be argued that Christ was tempted with a similar thought when He cried out to God in earnest prayer, “O My Father, if it is possible, let this cup pass from Me; nevertheless, not as I will, but as You will” (Matthew 26:39).

On the surface, it appears Brittany felt she was approaching a level of suffering that would be too much to handle. She believed that she should be the one to determine how much suffering she should have to endure. What did Christ do when He faced the same thing? The author to the Hebrews addresses that directly in chapter 2, where we learn a great deal about suffering and the believer.

Hebrews 2:10 says, “For it was fitting for Him, for whom are all things and by whom are all things, in bringing many sons to glory, to make the captain of their salvation perfect through sufferings.” Several verses later, he wraps up the section by again saying, “For in that He Himself has suffered, being tempted, He is able to aid those who are tempted” (Hebrews 2:18). He is communicating to us that God’s plan for Christ included intentional suffering. Christ had to find victory through His sufferings; it was fitting that He do so to help us today. Through Christ’s sufferings, God made provision to lead us through our sufferings.

So what does Christ teach us? How does He help us? Notice what He says after verse 10: “For both He who sanctifies and those who are being sanctified are all of one, for which reason He is not ashamed to call them brethren, saying: ‘I will declare Your name to My brethren; In the midst of the assembly I will sing praise to You’” (Hebrews 2:11, 12).  The author is calling upon Christ’s humanity as a unifying factor with us. He is so identified with our humanity that He is not ashamed to call us brethren!

In verse 12 the author quotes Psalm 22:22 to make his point. My first assumption was that he reached for this Old Testament verse for its use of the word “brethren.” His purpose, however, is far greater. Twenty-one verses preceding Psalm 22:22 form its context. Interestingly, all of the verses are full of suffering—the suffering of Christ on the cross. Psalm 22 is a messianic psalm, which predicts in vivid detail the sufferings of Christ on the cross. So the common denominator is that Christ, after suffering with us, calls us brothers. Something about His experience in that suffering causes Him to identify with us. Then the author of Hebrews calls upon us to identify with Christ and His victories.

Psalm 22 spells out Christ’s experience and victory well. After wondering aloud in the first verses why God has forsaken Him, Christ comes back to the reality that there is nothing more that He can do but trust in God and His plan just like His fathers trusted God in the wilderness (v. 4). After being despised and ridiculed by the people (vv. 6–8), He comes back to the reality of trust, saying, “But You are He who took Me out of the womb; You made Me trust while on My mother’s breasts” (v. 9). After His hands and feet are pierced and His bones counted (vv. 12–18), He comes back to the reality that He is utterly dependent upon God for deliverance (vv. 19, 20). After calling upon God for help and believing God will answer Him (v. 21), He praises God and shares His experience with us, saying, “I will declare Your name to My brethren; in the midst of the assembly I will praise You” (v. 22).

Reflecting on Brittany’s situation and Hebrews 2 taught me an important lesson: I will have the opportunity to share the glory of God with other mortals only during the brief years that I am alive on this earth. Every breath that God gives me is one more opportunity to learn about Him, trust Him, depend upon Him, and glorify Him, in spite of any suffering I may be going through. Ultimately, the point that counters any temptation to cut my life short is this truth: I am not looking for ways to cut short any of my opportunities to keep praising Him. Will I not find another way He is faithful and another way to praise Him again today? My tongue won’t do that after I am dead. I am reminded of another verse given to us by God through the psalms: “The dead do not praise the Lord, nor any who go down into silence” (Psalm 115:17).

I had a very good friend who pastored in the state of Washington. He was diagnosed with a brain tumor and had to walk a similar path. Yes, he suffered greatly and died last year. He did not choose to end his life early. Instead, he was motivated by something very different—the glory of God all the way to the end that God chose for him. According to Hebrews 2, Christ helped him every step of the way.

J. Wayne Hart is pastor of Maranatha Baptist Church, Grimes, Iowa, and serves on the GARBC’s Council of Eighteen.