A Sword Will Pierce Your Soul

The real meaning of Christmas is a message of hope flooding a darkened world with marvelous light, healing old wounds, reviving broken dreams, and setting the captives free. 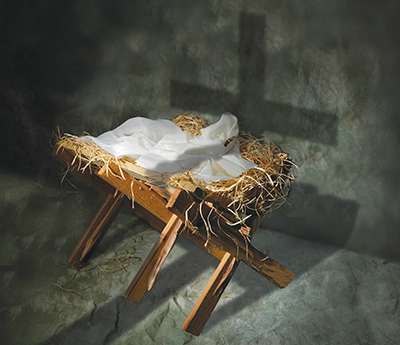 The Cradle, the Cross, and the Meaning of Christmas

“A sword will pierce your soul.” The strange words exited the old man’s lips and seemed to hang in the air for a moment, unnerving and unwelcome. The child’s mother flinched ever so slightly, her smile faltering. The announcement was utterly out of place, following as it did the joyous proclamation that her son would one day bring light to the Gentiles and glory to Israel. She glanced surreptitiously at her husband, wondering if she had misheard or misunderstood the prophecy. Perhaps the man’s words had been obscured by the bleating of sheep, the cooing of birds, and the din of temple traffic swirling around them. But no, Joseph’s face betrayed the same sense of puzzlement that Mary felt. A sword will pierce my soul? What could this mean?

It was not the first time bewilderment descended on the maiden from Nazareth. Over the last few years, normalcy—if there was such a thing—had been in rare supply. First there had been the report of Zechariah’s strange experience in the temple, followed by his mysterious muteness and his wife’s inexplicable conception. It was beyond rational explanation; how could a woman of Elizabeth’s advanced age suddenly conceive a son? But conceive she had, and no one could deny it. As the outward signs of pregnancy had gradually made themselves known, Elizabeth’s cousin Mary could not help thinking back to the extraordinary lives of the patriarchs. Those days were also marked by miraculous conceptions as the Lord opened the wombs first of Sarah, then Rebekah, then Rachel. At the time Mary had wondered if perhaps He was about to do something new in Israel.

The answer could not have been more unexpected or more earth-shattering. No matter how long she lived, Mary would never forget the dual sensations of sheer exhilaration and utter terror as the angel stood before her, bathed in an otherworldly light. “You will conceive and bear a son. You shall call Him Jesus. He will reign over the house of Jacob forever. Of His kingdom there will be no end.” In the wake of that proclamation had come an avalanche of unforeseen and quite unusual occurrences. The public disgrace of apparent infidelity. Another angelic visitation, this time to Joseph. A rushed and little-celebrated wedding ceremony. The stress of a difficult journey from Nazareth to Bethlehem. And then . . . pure joy. Into the darkness of a cave the Light of the World was born. Clothed in swollen, wrinkled flesh, the maker of all things was carefully laid in a stone feeding trough. Mary loved her baby boy, more than life itself.

Now, a little more than a week later, the Galilean family stood in the temple court in Jerusalem, transfixed by the extemporaneous prophecies of the aged man Simeon. The prophecy was promising, up until the very end: “A sword will pierce your soul.”

Mary pondered this statement. Doubtless she would ponder it again and again over the next three decades as she watched her son grow into a man. But if the angel’s annunciation had been unexpected, it would pale in comparison to the fulfillment of this prophecy. Jagged thorns. Iron nails. Splintery beams. That day would be defined by the sharp cracking of Roman whips, the agonized shrieking of a man condemned, and the bitter admixture of blood, grief, pain, darkness, and death. The sword would indeed pierce Mary’s soul as surely as the nails pierced her son’s hands and feet. And there at the foot of an old rugged cross, broken and undone, Mary would collapse.

There is a moment in time around which all of history revolves. Under a darkening sky three crosses hold their victims captive, suspended between heaven and earth. The Lamb of God cries, “It is finished.” Unceasingly cruel, death swallows up Bethlehem’s manger-child on Calvary’s altar. God’s wrath is appeased. The ransom is paid. Redemption is bought. And as day turns to night, and night to day, death will be overwhelmed by victory.

So that’s what Simeon meant. Thirty years later, the strange and disheartening prophecy finally makes sense. Jesus had lived a perfect life and died a bloody death. Two days have now passed since the men removed His body from that cruel instrument of execution. Dressed for mourning, Mary drags her sword-pierced soul to the entrance of her son’s borrowed tomb. But as soon as she can see the structure, bewilderment seizes her once more. The massive stone is lying on the ground, tossed aside like a child’s discarded toy. The tomb is empty. For the first time since Friday, the barest hint of hope begins to penetrate her gloom. The grave clothes are still there, but where is the body? In mere moments an explanation will present itself. It will take the form of an audacious and radical claim, more audacious than “the virgin shall conceive and bear a son” and more radical than “peace on earth, goodwill toward men.” It is a claim that will transform weeping into joyous celebration and change the world forever: Jesus is alive.

Today the world teems with life, but it is not a happy place. Behind the smiles and the laughter, amid the candy canes and jingle bells and miles of wrapping paper, pierced souls tremble with uncertainty and despair. The real meaning of Christmas is a message of hope flooding a darkened world with marvelous light, healing old wounds, reviving broken dreams, and setting the captives free. In short, it is this: “God was in Christ reconciling the world to Himself, not imputing their trespasses to them” (2 Corinthians 5:19). And “because I live, you will live also” (John 14:19).

David Gunn is managing editor of the Baptist Bulletin.