What Do You Mean, Relevant? 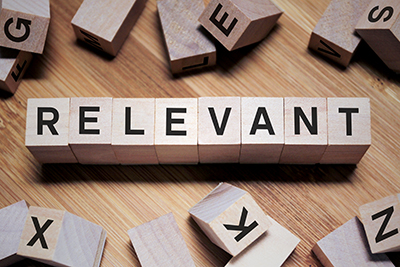 First, it is used as a synonym for germane or applicable. In this sense, a thing is relevant when it addresses some concern that matters, or ought to. For example, a prescription for penicillin is relevant for a person who has a strep infection.

In this sense, Christianity does not have to be made relevant. It is already relevant. It addresses the most fundamental human need, namely, to find forgiveness of sins and restoration of fellowship with God. Granted, people often do not understand the depth of their sin or the sufficiency of Christ’s atoning work. Because they lack these categories, the Christian message seems nonsensical to them. These are the very people of whom Paul writes that the rationale of the cross appears as foolishness (1 Cor. 1:18). Only the Holy Spirit can convince them. All that Christians can do to make Christianity relevant to such people is to explain the message as clearly as possible.

The notion of explaining the message leads to a related but distinct sense of the term relevant. In this sense of the word, to be relevant is to be intelligible. Intelligibility matters. Even an applicable message cannot be received if it cannot be understood.

Concern for this kind of relevance has led Christians to translate the Bible into new languages, and with good reason. People gain no benefit from having the Scriptures in a language that they cannot read. Furthermore, Jesus’ and the apostles’ use of the Septuagint provides a biblical example of using translation to make biblical religion relevant.

Even so, translations almost always obscure some part of the truth, particularly when the receptor language has no words or categories that adequately translate biblical concepts. For example, early missionaries to the Congo reported difficulty in communicating the gospel to people whose language contained no word for love. They eventually had to create a word and invest it with the concept.

Another example: the New Testament teaches that Christ offered Himself as a sacrifice. That statement meant one thing in a Jewish culture that had practiced fourteen hundred years of tabernacle and temple sacrifices. In Aztec culture, however, with its long history of human sacrifice to capricious gods, the statement would almost certainly mean a different thing. The culture itself would have to be reshaped—new categories would have to be introduced—before the gospel message of Christ’s sacrifice would make sense. Sometimes making Christianity relevant requires not the accommodation of Christian concepts and practices to a given culture but the conforming of that culture’s categories to Christian concepts and practices.

The third way in which people use the word relevant is to mean familiar. A thing seems relevant to them because they have been exposed to it enough that it is recognizable. A carpenter may have a much-used hammer that feels like an extension of the hand. A bowler may have a favorite ball that feels like it launches itself down the lane. A dad probably has a favorite chair that fits him because it bears the imprint of his personal anatomy.

Some people think that, to be relevant, Christianity has to fit like an old pair of jeans. Consequently, they want to recast it into forms and shapes that resemble whatever people are already comfortable with. They want their Christianity to be as little different from their ordinary habits as possible.

What they overlook is that the carpenter’s hammer was not custom-made for one hand. Rather, the hand that wields the hammer grows accustomed to it over time. The hand eventually conforms to the tool. And, while the metaphor is not quite as apt, the old pair of jeans feels so familiar exactly because body and garment have spent so much time together.

The fourth thing that people mean when they talk about Christianity being relevant is that it should be made appealing. With this the Scriptures agree: there are ways of adorning the gospel, and Christians ought to use them. The question is, What are those ways?

Too often people try to make Christianity appealing by transmuting it into something it is not. They offer false inducements for following Jesus. They attempt to draw people to the faith—or to help them grow in it—by attracting them to things that are not Christianity. They put themselves on display as weight lifters, martial arts practitioners, rock stars, or other faux celebrities. Their message appears to be something like, “I can break six boards with my bare hand, so you should follow Jesus.”

Christianity must be made attractive. Sound doctrine must be adorned. But how? Paul answers in Titus 2: old men are to adorn sound teaching by their self-control, dignity, sensibility, soundness, charity, and perseverance. Old women are to adorn it with reverent behavior and good instruction, avoiding gossip and inebriation. Young women are to adorn it by loving their husbands and children, displaying sensibility and purity, and submitting to their husbands. Young men can make sound teaching appealing simply by being sensible.

Christians can never attract people to Christ by making themselves seem impressive. Carnal inducements will never turn people into Christians. To adopt these subterfuges is to morph Christianity into something it is not. It is to sabotage the faith that was once-for-all delivered. Furthermore, it is to wreak incalculable practical damage.

Why? Because twenty-first century Americans live in an anti-culture of despair. They are approaching the end of a turn that began with a lie. They have committed themselves to a metaphysical dream that robs them of morality, then meaning, and eventually identity. They can no longer say what is good, what is beautiful, what matters, or even who they are.

These people have created a popular culture that does two things. It expresses the despair in which they live: the hopelessness, the anxiety, and the rage. It also tries to provide enough distraction or cultural noise—whether through opulence, sensuality, inebriation, or spectacle—to stifle the despair.

If Christians want to be relevant, then the worst thing they can do is to imitate this culture. Every time they do, they are saying, “We’re just like you! We’re desperate, too! Look how anxious, hopeless, and angry we are!”