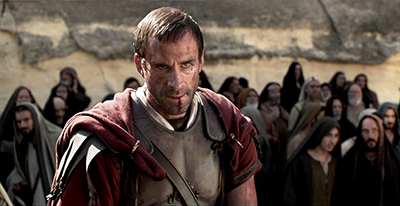 While the plot device of Clavius investigating Yeshua’s (“Jesus” hereafter) resurrection is a convenient method to weave Biblical resurrection accounts and the film’s historical-fiction story line, it feels forced at times. Much of the details that advance the plot from one Biblical vignette to another are pure fiction; there is no historical or Biblical record of an investigation ordered by Pilate and the attendant chase scenes and interactions.

That being said, the scenes lifted from Biblical texts are communicated with a fair amount of plausibility—if you can suspend disbelief regarding Clavius’ convenient presence at all of the events. The selection of Matthias in Acts 1 and Paul’s record in 1 Corinthians 15 of 500 people seeing the resurrected Jesus remind us that there were more than the 11 disciples who interacted with Jesus after His resurrection. As long as we remember this is historical fiction, we need not be too concerned with Clavius’ insertion into the story line. There is certainly nothing heretical to the gospel presented in the account.

One major Biblical inaccuracy found in the film is the presentation of Mary Magdalene as a prostitute (while in the realm of possibilities there is no evidence to support this claim). This depiction, along with Mary Magdalene’s touchy-feely presence as the only woman in the room during Thomas’ seeing and touching the resurrected Jesus, frustrated me. Mary Magdalene’s role in the story seemed overdone, especially since there were multiple female witnesses to the resurrection.

The movie concludes with Clavius having three key interactions: a conversation with Jesus on the night before His ascension, an invitation from Simon-Peter to join in fishing men, and a final conversation with an innkeeper. These three interactions show a change in Clavius from questioning/confused to unsure to converted. This conclusion opens the door to fruitful conversations and questions.

As a historical-fiction account that incorporates Scripture, the movie can be dangerous. A viewer may become confused about what is truly Biblical and what is fiction. Another danger is that by telling the story from the eyes of Clavius and his conversion, the movie makes him the hero of the story rather than Jesus. While it’s important for all of us to consider the resurrection and its implications in our life, Jesus is always the hero.

On the positive side, the movie presents several important apologetic arguments for the resurrection. Obviously the movie shows the empty tomb, but it also shows the care that was given to prevent theft of the body. Risen also depicts the changed lives of the disciples. Their fear demonstrated by their absence at the cross is transformed into boldness as missionaries at the conclusion of the film. Jesus’ post-resurrection interaction with many people other than the disciples is shown, although not always obviously. The cover-up attempts coupled with a lack of plausible stories are also presented. Risen, through its storytelling, shows these arguments in a compelling manner.

I recommend this movie and pray it will be used by God.

Discussion questions for those watching with unbelievers: