Reflections on the Orlando Terrorist Attack

The recent savage shooting in Orlando has left the nation reeling, stunned by the awful display of cruelty and barbarism. It is fitting and proper, at a time such as this, to “weep with those who weep." 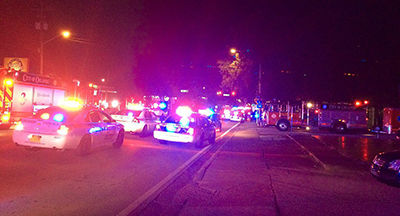 It is with deep sadness that I pause to reflect on yesterday’s savage shooting at a gay nightclub in Orlando. Armed to the teeth, ISIS-aligned Islamic extremist Omar Mateen descended on the Pulse nightclub and opened fire. His brutal rampage killed 49 people and wounded 53 others before SWAT officers were able to shoot and kill Mateen. This was the deadliest terrorist attack on American soil since Sept. 11, 2001, and today the nation is reeling, stunned by the awful display of cruelty and barbarism.

It is fitting and proper, at a time such as this, to “weep with those who weep” (Rom. 12:15). As conservative Christians, we likely do not have much in common, ideologically speaking, with the victims of this attack. But that doesn’t matter in the slightest. They were our fellow men and women, endowed by our creator with unalienable rights and bearing within their souls His image and likeness. They were our neighbors, whom Christ instructed us to love just as much as we love ourselves, and they were persons whom Jesus loved and prized so highly that He shed His blood for them, even as He did for us. In this dark hour, it behooves us to set ideological differences aside and express our earnest sympathies and heartfelt sorrow to the victims of this deplorable travesty and to their families.

It has been especially disheartening to me to witness the immediate politicization of this national tragedy. As I write these words, the airwaves are filled and social media is buzzing with accusations, arguments, and vitriol during a time that calls for kindness, compassion, and sensitivity. The left is seizing upon the incident as an opportunity to push gun control, while the right uses it as an excuse to lambast the current administration’s perceived lack of effectiveness in combating ISIS and other Islamist extremist groups. Neither of these attitudes or activities is Christlike or helpful. Let us resist the urge to descend into controversy, and instead focus upon our common humanity as we weep with those who weep and seek to demonstrate God’s boundless love and mercy to a distressed and bereaved world.

Previous post A Response to the Allegation Regarding Robert T. Ketcham