Mothers are not generally regarded as warriors. However, the Bible describes some mothers who fought in a hand-to-hand combat for their children. 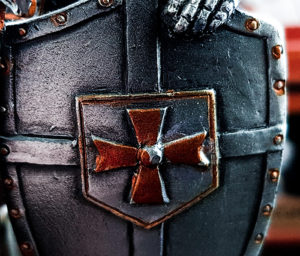 Mothers are not generally regarded as warriors. They are more nurturers and protectors. However, the Bible describes some mothers who fought a different kind of battle. They were all engaged in a hand-to-hand combat for their children.

In the Old Testament Hannah was childless. She prayed for a son earnestly and told the Lord if He would grant her request she would dedicate him to the Lord’s service. She was able to go through the pain of her situation by her faith in the Lord’s answer to her prayer. Hannah had her shield of faith.

The prophet Simeon told Mary what greatness her son, our Savior, would achieve but also said that a sword would pierce through her own soul. Mary would have to watch her son die on the cross. What a tremendous battle Mary went through on that day. Her only hope would be her faith that her son would rise from the grave. Mary had the shield of faith.

I think of Eunice, the mother of Timothy who had a great influence on her son. The Bible says that the genuine faith that was in Timothy was first displayed in his grandmother Lois and then modeled to Timothy by his own mother, Eunice. In another Scripture we have indications that Timothy’s own father was not a believer. Eunice worked hard to tutor her son in the Scriptures and the lifestyle and behavior of those who believed in Jesus Christ. In order to accomplish her task with Timothy, Eunice put up her shield of faith.

Each of these mothers were warriors in their own rights. Their battles all involved their own children. They serve as examples to all mothers and grandmothers today. The front lines of today’s warfare is still fought for the children. No matter how old the children are, mothers are still fighting. Sometimes like Mary the sword pierces through their soul as well. Sometimes like Hannah the prayers are so intense that others think they’re crazy. They have no concept of a mother’s battle. And sometimes like Lois and Eunice the task of modeling the faith never ends. Today’s warrior mothers still need to pick up the shield of faith in the battle for their children.