Note: The following interview accompanies a series of articles in the November/December 2013 Baptist Bulletin. Read “Adam: Man or Myth?” and “Proving Adam . . . from Scripture”  for a summary of the current positions on the historicity of Adam. 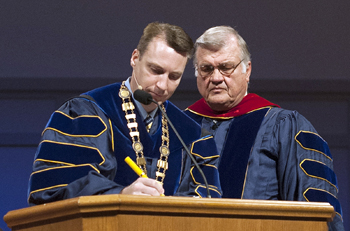 Mindful of Cedarville’s reputation for being theologically conservative—and mindful of its recent controversies—White used his opening address to affirm the university’s historic position.

“Cedarville University will continue to stand for the Word of God and the testimony of Jesus Christ,” he said. “We will teach the literal creation of an historic Adam and Eve, hold forth the truth and certainty of an inerrant Word of God, defend the exclusive gospel of Jesus Christ, and exalt Jesus to the ends of the earth.”

His comments were necessary. Just a few months before White met with the selection committee, Cedarville trustees had dismissed a Bible professor for his interpretation of the historical Adam issue. Other Christian colleges—farther left than Cedarville—endured campus controversies when faculty members were accused of unorthodox Adam views.

In a Baptist Bulletin interview a few days after his inauguration, Thomas White talks about the historical Adam and the importance of doctrinal integrity.

How did you address the Adam issue during your inauguration address?

I started out thanking some people for being there, then I  described three battles that we must fight at Cedarville. The first one was theological drift. The second one was ministerial negligence. And the third one was monetary bondage. Under the theological drift section, I said this:

God gave us divine revelation. It’s inerrant. It’s infallible. It’s from this Bible and the Holy Spirit living within us that we may know truth and possess certainty. The Bible tells us that in the beginning God created all things. As the pinnacle of creation, He created a historic Adam from the dust of the earth and a historic Eve from Adam’s ribs. He created them in the image of God. That sin that they committed separated them from a holy God, and from that point we have all inherited a sinful nature.

I believe about a God Who was born of a virgin, lived a sinless life, died on the cross as a substitute for my sin, paying the penalty that I could not pay to provide salvation for me if I repent and put my faith and trust in Jesus Christ. And that’s what this Books says, and that’s what I believe, and that’s what we will teach.”

Did the Adam question come up when you were interviewing for your new position?

Yes, it did come up in the interview process. They asked my views on six-day, literal creation, and then they asked about young earth/old earth. I answered by explaining my six-day, literal creation, young earth position. I hold this view for a reason, not because it’s the default position. I look to the Pentateuch as a whole and its justification for the Sabbath (“For six days God worked and then on the seventh He rested”). If you hold to a day-age theory or some old earth theory, that position doesn’t really provide a justification for our rest on the seventh day. I believe Moses even gives us an indicator in Exodus 20:8–10. And in Mark, where Jesus quotes Genesis 1:27 and says “from the beginning it was so” (Mark 10:6), He gives us an indication that male and female were created at the beginning. So I very strongly believe in the young earth, six-day, literal creationist position—both scientifically and theologically.

If I’m summarizing correctly, you arrived at your position for exegetical reasons, rather than a theological analysis. 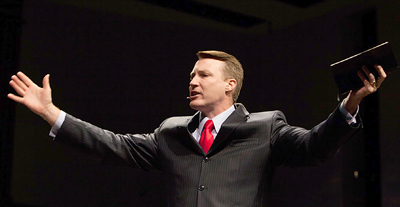 In a university setting, is there room for a range of opinions about Adam?

At Cedarville University, the answer is provided by the trustees in our doctrinal statement. We don’t have any wiggle room on the historic Adam viewpoint. But we do have some wiggle room on the young earth versus old earth views. For instance, W. A. Criswell held to a gap theory between Genesis 1:1 and Genesis 1:2. I’m certainly not going to call W. A. Criswell a heretic, but at the same time, I don’t hold to those theories. I believe in a young earth view.

Regarding Adam, Cedarville’s doctrinal statement says, “We believe that man was created perfect in the image of God, that he sinned and thereby incurred not only physical death but also that spiritual and eternal death which is separation from God, and that all human beings are born with a sinful nature, and we are sinners in thought, word, and deed.”

In 2011 Cedarville’s trustees published a white paper to further clarify their position: “The current Board of Trustees once more affirms that God, by a special act of creation, made Adam and Eve and that they did not share a common ancestry with primates. They consider all positions which endorse Darwinian evolution, or which deny the historicity of Adam and Eve to be incompatible with the Cedarville University Doctrinal Statement.”

How important is the Adam issue—should all of Cedarville’s professors toe the line on the university’s position?

I think it’s essential. For practical reasons, pragmatic reasons, there’s truth in advertising. If we say that we’re going to be a university that holds to a doctrinal standard, and our doctrinal standard says that Adam was a real, historic human, then we have to hold to what the doctrinal statement teaches. It’s also about being a university you can trust. Parents are going to send us their children, their most prized possession in all the earth. The students are going to work out their own faith for their future families or in their future ministry for Christ. We have to make sure that we allow students to ask questions, but also make sure that our professors are grounded in the right answers and able to guide students to a good theologically conservative position. So pragmatically speaking, it’s essential.

As a personal opinion, I think the discussion about a historical Adam is a gospel issue—it’s that important. When I read Romans 5:12–21 or 1 Corinthians 15 there leaves very little doubt that Paul believed in a historic Adam. Paul is tying the gospel and the second Adam back to a first (historic) Adam. If we start undermining that belief in a historic Adam, not only have we undermined inerrancy and infallibility of the Scriptures, we have undermined the gospel itself.
Even on other issues, such as egalitarianism, Paul refers back to creation: “For Adam was formed first, then Eve. And Adam was not deceived, but the woman being deceived, fell into transgression” (1 Timothy 2:13, 14). Paul is looking at the Fall as a historical account. Once we start undermining that, we basically undermined all of Paul. So I see the historic Adam as a gospel issue and as an issue that is essential to the faith.

Do you feel like the university’s position on Adam could potentially cost it students?

Yes, I do. I think that our position on Adam could cost us some students who may not have been grounded in Biblical literacy or may have read some of the secular scientific information that would disagree with a real Adam. But at the end of the day, we’re not about just gaining students. Cedarville’s got to be about making an impact for the kingdom of God through the gospel of Jesus Christ. Once we start accommodating our position so that we’ll have student growth, we may grow bigger, but our impact is going to grow smaller because we’ve watered down our faith. Although our position may cost us students, I think it actually brings clarity and helps us use our efforts for kingdom impact instead of wasting our time.

I want to provide a good, thorough education and hold a high academic standard—but I want to tell students, “This is who we are. These are the teachers you can expect to be in every classroom at Cedarville.” Then if a student says, “I don’t fit here. I don’t belong here,” I think we have to say, “We’re okay with that. There are other schools that can educate you. We’re going to be who we are, and we’re not going to apologize to everyone because we’re standing firm on the Scripture.”

Could you lose faculty members over issues like this, if some eventually conclude they would fit better in a different institution?

Yes, we could. And honestly, if they tell me, “I’m shifting in my theological beliefs,” I’ll be glad to help them find a different institution where they’ll fit better. The problems develop when boundaries are not clearly laid out on the front end, or when a professor has shifted beliefs without telling the institution. Then we end up with a problem because we’re no longer a place you can trust—not teaching what we said we were going to teach.

I feel it is my job as president to give a clear expectation of who we are at the front end, and then to tell the faculty every year at the fall faculty meeting, “If you have changed or shifted in your beliefs, that’s okay. But that might mean you don’t belong at Cedarville anymore. So if you have shifted, you need to come see me. We will help you find a place where you can serve with confidence rather than undermining the future vision of our institution.”

Just stepping into your role at Cedarville, does it impress you as an institution that was changing to a less conservative position?

When I look back over the course of Cedarville’s history, at its transition to a Baptist school with James T. Jeremiah and later with Paul Dixon, there was a clear stance on where the university stood on a lot of issues. I think that in recent years, some have questioned where the institution was headed or what it believed on certain issues. Those are legitimate questions to ask of any institution. We have had some transition, and some people are wondering what that transition means.

To those people I would like to say we are going to move forward with a firm foundation on an inerrant, infallible Bible. We’re going to teach a conservative theology that believes in an exclusive gospel, that believes in a literal Heaven and a literal Hell. We want to get the gospel to all seven billion people on the planet—we want to make sure as many people go to Heaven as possible. We know where we’re going and we know where our founding roots are.