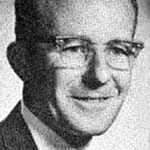 Warren Simmons, during the time he worked with the Fellowship of Baptists for Home Missions

BRADENTON, Fla.—Warren Edward Simmons, a missionary to children, died Feb. 7. He was 95.

Warren would say the most important event of his life occurred when he was a teenager attending the Ontario Bible Conference, where he professed Christ as Savior. But another important event occurred when he was stationed in Okinawa during World War II: he witnessed the death of a child. That experience moved him so deeply that when he returned from the war, he gave up his business as a jeweler to teach children about Christ.

Like his father, Warren had been a jeweler. Even while serving in the Marines as a gunnery sergeant, Warren was tasked with fixing watches. He fought not only in Okinawa and but also in Saipan during World War II, and while stationed earlier in Philadelphia, he met his future wife, Mildred Walters, at a USO dance.

Returning to the States after serving in Okinawa, and with the death of that child fresh on his mind, he began working with Streamside Camp and Conference Center in the Poconos. There he focused on reaching out to needy kids from New York City.

He went on to graduate from Baptist Bible College in 1955. An extraordinary communicator, he spent 45 years training teachers how to reach children for Christ. He worked with and led children’s camps; relentlessly told people about Christ, the great Change Agent that had forever changed his life; and served as a missionary to children with the Fellowship of Baptists for Home Missions and Continental Baptist Missions. In a 1971 publication detailing its history, the Fellowship of Baptists for Home Missions said that Warren, who had been hired in 1968, was “wonderfully prepared by ability, burden, education, and experience.” In addition to his ministry with children, Warren also planted two churches and pastored several.

Warren never stopped sharing his faith in Christ. In retirement he promised the Lord that he would share the gospel with one person every day. Sometimes he patiently waited for hours in Walmart or McDonald’s to speak with a receptive person. Even in his last week of life, despite diminishment from dementia, he asked his hospice nurse for a half hour so he could share his Savior.

He was preceded in death by a son, Dana, 51 years ago.

He is survived by his wife of 73 years, Mildred; a son, Dan; and two grandchildren, Andrew and Kirsten.