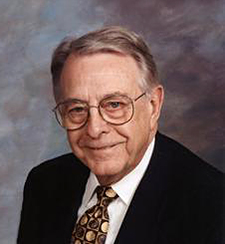 A 1945 graduate of Moody Bible Institute, Draper worked for Radio Bible Class and was later director of Moody Broadcasting. He founded the Wheaton, Illinois, company Broadcasters Associates to assist ministries with radio production and advertising. As a longtime friend of Joseph Stowell II, GARBC national representative from 1969 to 1979, and William Kuhnle, assistant to Stowell, Draper was a natural choice to produce the GARBC’s new radio venture.

Stowell was concerned that Regular Baptists were “talking to themselves” too often, and believed that the GARBC’s ideas needed broader exposure within evangelicalism. After consulting with Draper, GARBC leaders developed a program that featured Kuhnle as announcer and Stowell as preacher. “Draper contacted radio stations, negotiated contracts for air time and generally was the ‘troubleshooter’ as agent,” according to Quest for Faithfulness, published by Regular Baptist Press. “As producer he aided Kuhnle and Stowell in putting together a broadcast format, secured proper music and did the ‘nuts and bolts’ work of putting it all together with the recording studio personnel.”

Living Reality would eventually air on more than 100 stations nationwide, including the Moody Radio Network.

Draper was also an active church musician, having previously served as music director at Philadelphia’s Church of the Open Door. When the GARBC’s new radio program needed music for each broadcast, Draper offered to organize and conduct a group of professional singers. He contracted a well-known Chicago recording group, Sixteen Singing Men, to sing under the name of Living Reality Singers, who would eventually produce two GARBC record albums.

Draper was preceded in death by his wife of 68 years, Dolores. He is survived by a son, James, and a daughter, Melody; four grandsons, and five great-grandchildren.