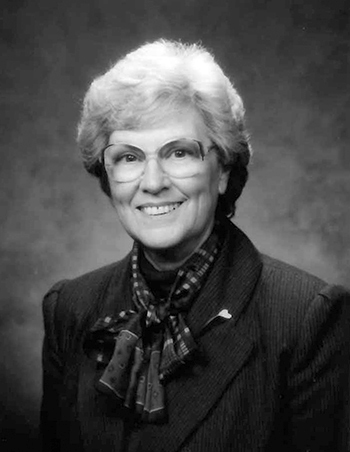 Shirley served alongside her husband, Merle, as he was pastor of Center Street Baptist Church, Marshalltown, Iowa; Walnut Park Baptist Church, Muscatine, Iowa; and Westwood Baptist Church, Flint, Mich. During their ministry at Walnut Park “and for years following, the church evidenced a passion for the ministry of the Sunday School,” notes John Greening, GARBC national representative.

Shirley no doubt played a large role in developing Walnut Park’s passion for Christian education, as she faithfully taught Sunday School for many years. Even after her husband died in 1990, she continued to teach as a member of Faith Baptist Church, Winfield, Ill.

In 1954, while Merle was pastoring Walnut Park Baptist Church, he and Shirley were asked by Dr. R. T. Ketcham, then national representative of the GARBC, to join the Regular Baptist Press staff in Dayton, Ohio, as Sunday School consultants. RBP was only two years old at that time. Then in 1955, when the staff relocated to Chicago, Merle became executive editor of RBP, and Shirley joined the editorial department staff. She served as assistant to Merle; was a consultant, speaker, and writer of Sunday School curriculum; and, from 1980 to 1987, was editor of Sunday School take-home papers.

“These valiant young servants responded like Abraham to follow God in an uncharted course, which was to become a lifetime of fruitful ministry,” said Joseph M. Stowell, GARBC national representative from 1969 to 1979. “With divine enablement, they grew as the demands of the work expanded.”

When Dr. and Mrs. Hull retired in 1987, the GARBC Council of Eighteen paid them the highest honor by presenting a resolution at the GARBC Conference in Ames, Iowa, that acknowledged the couple’s fruitful ministry. The resolution read, “Shirley served as his faithful and devoted wife in the ministry of their home as well as the mutual work at Regular Baptist Press. . . . [We] express our deep gratitude to Dr. and Mrs. Hull for their ministry to our Fellowship, and express to God our thanksgiving for His effective use of His servants.” The resolution passed unanimously, and those in attendance gave the Hulls a standing ovation.

“Dr. and Mrs. Hull worked admirably as a team to bless the lives of thousands,” said Paul Tassell, then GARBC national representative, in the October 1987 Baptist Bulletin. In that issue he wrote a humorous and fitting tribute to the Hulls—“with appreciation for, and apologies to, the writer of the last 22 verses of Proverbs 31.” Tassell wrote, “Who can find a discerning editor? His type is worthy of headlines. . . . His wife is known in the Fellowship when she teaches in Regular Baptist Press Sunday School conferences.”

With Shirley’s skills in Sunday School ministry and writing, the Hulls were a “competent, committed, conscientious, and congenial team,” said Merle’s friend Ken Elgena in 1987. He expected the Hulls’ retirement years to “find them responding to many requests to share the rich resources of the many years of experience to which they have unselfishly given their lives.”

Shirley was preceded in death by Merle on Nov. 12, 1990 after 47 years of marriage, and by a daughter, Jeanne Arnett. She is survived by a son, Tom, and two grandchildren.

Shirley lived her life in loving devotion to God, always thinking of the other person and making sure everyone knew that they were important and loved by God. The impact of her generous and caring spirit will carry on in the lives of her family, friends, and many who never even met her. She will be greatly missed.