Howard Hendricks with the Lord

DALLAS, Texas---For every teacher who walked into the classroom unprepared, Howard Hendricks was a scary man. The beloved professor of Bible and Christian Education died Feb. 20. 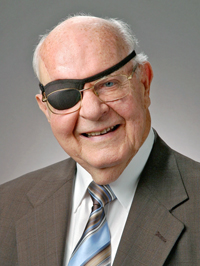 DALLAS, Texas—For every teacher who walked into the classroom unprepared, Howard Hendricks was a scary man. “A student who is fully taught will be just like his teacher,” he would say, quoting Luke 6:40. “The teacher has not taught until the student has learned.” “Never traffic in unpracticed truth.” But for the student who wanted to learn practical techniques for teaching the Bible effectively, Hendricks was a treasure. He died on Feb. 20, having taught for 61 years at Dallas Theological Seminary. Hendricks came from a broken home, his parents having split up after he was born. He was raised by his grandmother and described himself during elementary school as a troublemaker. According to a Dallas Theological Seminary tribute, caring words from his sixth-grade teacher changed his life. “People are always looking for someone to say, ‘Hey, I believe in you,’” Hendricks was quoted as saying. Hendricks earned a bachelor’s degree from Wheaton College in 1946 and a ThM from Dallas Theological Seminary in 1950. While in seminary he was pastoring a church in Fort Worth, Texas, planted with the help of Dr. John Walvoord, then theology department chairman of DTS. When Walvoord asked Hendricks to join the faculty part-time, he agreed, famously reasoning that instead of pastoring one church, he could train 10 students to pastor 10 churches. One year later Hendricks became a full-time professor of Bible and Christian Education, eventually teaching more than 10,000 students in his career. One of those students was Dr. William Higley, now associate professor at Baptist Bible College, Clarks Summit, Pa. “Dr. Howard Hendricks was affectionately, and simply, known as the ‘Prof’ to everyone at DTS,” Dr. Higley says. “His passion and love for God and God’s Word was his greatest gift to his students. Rare is the man who has touched so many lives by living before them what it means to love God. Personally, when I think of Howard Hendricks, I think of someone with a passion to equip other people for ministry. His life was dedicated to fulfilling 2 Timothy 2:2. Dr. Hendricks was known for his famous quip, ‘It’s a crime to bore people with the Word of God,’ and he never did. He constantly challenged the future pastors and ministry leaders who sat in his classroom to take that passion and responsibility into the hearts and lives of those we would touch. And the influence of that passion for kingdom purposes is felt around the world—including in the churches and schools related to our association. That is an incredible legacy.” Teaming with Howard Hendricks was his wife, Jeanne, who “was from the beginning an active participant in Howard’s ministry,” according to Wheaton College’s alumni magazine. “For 10 years she facilitated a discipleship group in her home for the wives of Howard’s pupils, later reaching out to female students as the seminary’s student body diversified. She has spoken at a number of women’s conferences and joined Howard in presenting conferences for married couples.” Howard and Jeanne invested their lives in students at DTS. Mike Nemmers, pastor of First Baptist Church, Grundy Center, Iowa, recalls, “One of the highlights of my wife’s and my time at DTS was the discipleship class that I took my fourth year. That personal time with ‘Prof’ and only 12 others in that class was ‘priceless!’ But to complete the package, ‘Prof’ had Jeanne take the students’ wives into their home for a time of discipleship as well. Oh, and who of us will ever forget that first class we had with ‘Prof,’ Bible Study Methods, and those 75 observations, then 75 more observations(!) … as the Word of God became SO real to us!!! To God be the glory for this servant who opened the depths of Scripture to us.” “You can impress people at a distance, but you can only impact them up close,” Hendricks said. Other students under Hendricks’ teaching included Joseph Stowell, David Jeremiah, Chuck Swindoll, Bruce Wilkinson, Erwin Lutzer, and Tony Evans. DTS says, “According to a 2003 Dallas Morning News article about him, the combined ministries of just eight of his former students, a veritable Who’s Who of Evangelical Christians, reach close to thirty thousand people in the pews every week. Add radio programs and books to the number, and the audience expands to millions.” Outside the seminary, Hendricks ministered in 80 countries, served on numerous boards, wrote several journal articles, was a chaplain to the Dallas Cowboys (1976–1984), spoke at many events, and preached on national radio stations. He was also the author or coauthor of 18 books on Bible study, Christian Education, and Christian living. His books Teaching to Change Lives and The Christian Educator’s Handbook on Teaching have influenced students in college classrooms across the country. Wheaton College awarded him an honorary doctorate in 1966. In 2011, Hendricks retired from teaching. At that time he was distinguished professor emeritus of Christian Education and Leadership. Diagnosed with Alzheimer’s, he said, “My body refuses to cooperate with my mind, as if it were a stranger.” The diagnosis came several years after he had skin cancer; its removal required surgery to his skull. After surgery, reports DTS, the doctor told him, “It’s obvious that God is at work in your life. This cancer went as far as it could go toward your ear without affecting your hearing, as far as it could go toward your eye without affecting your eyesight, and as far as it could go toward your brain without affecting your mind.” At DTS, the Center for Christian Leadership, which Hendricks founded in 1986, stands as a reminder of his legacy. In December 2012 it was renamed the Howard G. Hendricks Center for Christian Leadership and Cultural Engagement. He leaves behind his wife, Jeanne; four children; six grandchildren; and two great-grandchildren.
Posted in News, With the Lord on February 21, 2013.

Previous post Sending a Bit of "Home" on Valentine's Day