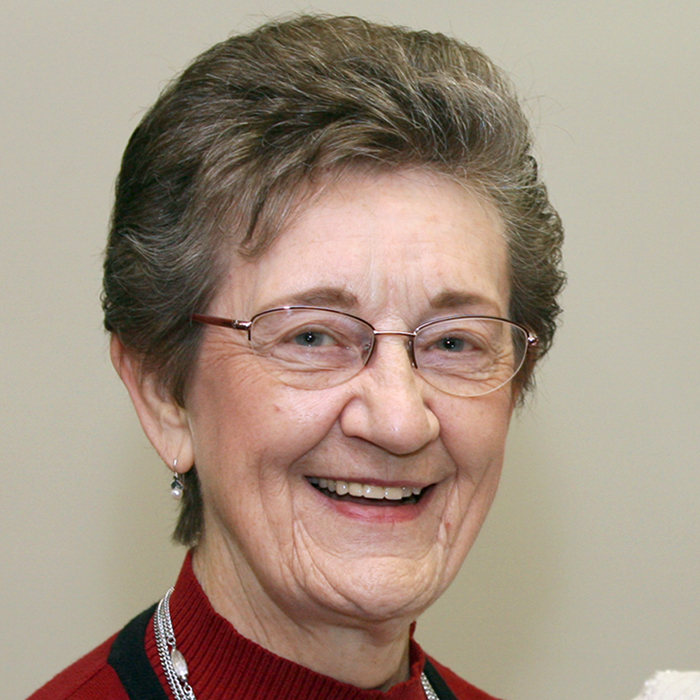 “The only thing I ever wanted to do was work in an office,” Gladys Dillon once said, reflecting on her long career with the General Association of Regular Baptist Churches. “I was able to do the things I loved and still be in ministry!”

When she was hired in 1959 as an assistant secretary, she never dreamed that she would stay for 50 years and become the longest-ever GARBC employee.

Growing up in Rocky River, Ohio, she attended Avon Baptist Church in nearby Avon. Later her family helped plant Grace Baptist in Rocky River. During her high school years, she doubted her childhood profession of faith, and at age 16 she experienced the true saving power of salvation. After graduating from high school, she worked as a secretary for H. R. Bowers Co. in Cleveland. Two years later she enrolled at Baptist Bible Seminary (now Clarks Summit University). While in college, she roomed with Pat Brannen, igniting a lifelong friendship. They shared much in common, including their love of church music. Gladys played piano and organ and studied choral conducting.

“First and foremost, she believed the gospel,” Pat says. “Jesus died for sinners and rose in triumph from the grave—it was the guiding principle of her life.”

Meanwhile, Robert Ketcham was leading weekly prayer sessions at the GARBC office in Chicago—the first step in his employee recruitment drive. The association of churches had grown rapidly throughout the 1950s, but the overworked staff had not. After Ketcham suffered a heart attack in the spring of 1959, he knew he needed more help, and Gladys was the answer.

She moved to Chicago, and coworkers immediately noticed her special gift. Back in the 1960s, people talked about “organized religion” as if it were bad—but Gladys thought the opposite. The GARBC needed more organization, not less, at least when it came to serving the needs of its churches. Within two years she was promoted to supervisor of the customer service department.

By this point, Pat Brannan had also joined the GARBC staff, becoming editor Merle Hull’s assistant for the Baptist Bulletin. Gladys and Pat found an apartment on Chicago’s north side, joined Belden Avenue Baptist Church, and became active in ministry. Soon they were joined by Isabelle Hollenbaugh and Valerie Wilson; all four would serve at the GARBC office for 40 years or more.

Gladys lived and worked through several generations of technological change. When she started, Regular Baptist Press was essentially a mail-order business. Customer Service meant answering the hundreds of letters arriving each week. Then came the era of toll-free phone orders, requiring new systems and training. In 1969 she negotiated the purchase of the GARBC’s first computer, a refrigerator-size IBM System/3, running punch cards that kept track of the customer database. A few years later, Pat helped research computerized phototypesetting equipment and brought RBP out of the lead-type era.

“What we didn’t know, we learned,” Gladys said, somewhat nonchalant about their personal irony—Bible college graduates who suddenly became computer experts, managing large budgets and a staff of workers. And if it needs to be mentioned, as women—in the 1960s. Baptist women in the 1960s.

When the GARBC office moved to Schaumburg, Illinois, in 1976, Gladys and Pat moved to the suburbs and eventually joined First Baptist Church of Arlington Heights. Gladys taught Sunday School, played the organ, and directed the choir; Pat sang soprano. Then came the surprises.

George Carapelle, a retired GARBC pastor whose wife had died, proposed to Pat, and they married in 1990. Suddenly Gladys lost her roommate and found her life upside down—until she got a phone call from Chuck Dillon, a longtime member of First Baptist whose wife had also passed away. After a few months of quiet dating, Chuck and Gladys announced their relationship in the traditional way: walking up the aisle at church, sitting a little too closely, sharing the same hymnal. They married in 1995 (Gladys was 59!), with Pat and Valerie serving as bridesmaids. Chuck’s children, now adults and starting families of their own, adopted Gladys as a new grandmother.

By this point the old guard had retired from the GARBC office, and Gladys moved to the top of the seniority list, followed by Pat, Isabelle, and Valerie. Now they were working on desktop computers, learning new software, and living through another period of change. John Greening became the GARBC national representative in 1996, meaning that Gladys had served with six of the seven men who led the fellowship since 1932. She retired in 1998 and enjoyed her years with Chuck, and when he passed away in 2003, Gladys came back to work.

When the youngsters took over, they were branded as “digital natives,” born with computers and internet access. Gladys brought a different perspective as one who thrived during eras of change. She could navigate the new Excel spreadsheets, but she still knew shorthand dictation. She became unofficial counselor to a new generation of leaders, valued for her tribal memory and her ability to organize just about anything.

In 2011 she retired for good, moving to Spokane, close to Chuck’s daughter. Gladys stayed in touch with her old friends, but the COVID-19 outbreak created challenges. With her care facility in quarantine, she couldn’t leave her room for a full year; she connected to the rest of the world by cell phone. On Sunday mornings she joined the Arlington Heights church via YouTube, singing the old songs by herself.

On March 4 she suffered a heart attack and was rushed to the hospital. Of course Gladys was taking notes, like she was preparing for an important meeting. She made a list of names and asked her granddaughter to help make a few final phone calls.

“That was Gladys—an organizer until the very end,” Valerie says. “I was probably the last one she talked to.”

And Gladys got right to the point. “I’m not going to be here long.”

A bit confused by the greeting, Valerie asked the obvious question. “Gladys, how are you?”

“Not very good. I’m not going to make it, and that’s okay. I’m going to Heaven!”

Valerie talked a few more minutes—“I told her she was getting there ahead of us”—and said goodbye.

A memorial service will be held at New Hope Bible Church, Spokane Valley, Washington, on Tuesday, March 16, at 11:00 a.m. PT. The service will be livestreamed at the church’s website, 4newhope.com.

Kevin Mungons is the backlist curator for Moody Publishers and a member of First Baptist Church, Arlington Heights, Illinois. He previously served as managing editor of the Baptist Bulletin.

A Tribute from a Church Member: Gladys and the Triplets

Gladys Dillon left an indelible imprint on my family—me, my wife, and our three boys, now age 16. Gladys considered the boys her “special triplets.”

To honor Gladys’s late husband, Chuck, my wife and I selected Dillon as the middle name of our firstborn triplet. When the boys were babies in the church nursery, Gladys regularly would peek through the doorway after the Sunday morning service. As toddlers, the boys became her Sunday School mission. She worked with them to learn about Jesus and the Bible—sitting with one of them through class to help shift his busyness to attentiveness.

After Gladys moved to Spokane, her interest in her “special triplets” continued. Over the years, the Barlow Five and Gladys faithfully kept in touch through Christmas cards and emails.

When Gladys learned the boys were pursuing music and band, she expressed such joy. She delighted in watching and listening to their performances online, especially when they wore their dress-up suits. Then at Christmas 2018, Gladys shared with us her decision not to travel long distance anymore.

“I think of them regularly since they [the photos] have a spot on my refrigerator,” she wrote. “They are quite the young men, and I’m happy that I had the opportunity to work with them in Sunday School.

“I wish I could see them again, but traveling is out of the question for me,” she continued. “We will meet again sometime when He comes to take us Home. Looking forward to that day.”

Every church deserves and needs a Gladys—and a Chuck.