According to Warren Wiersbe 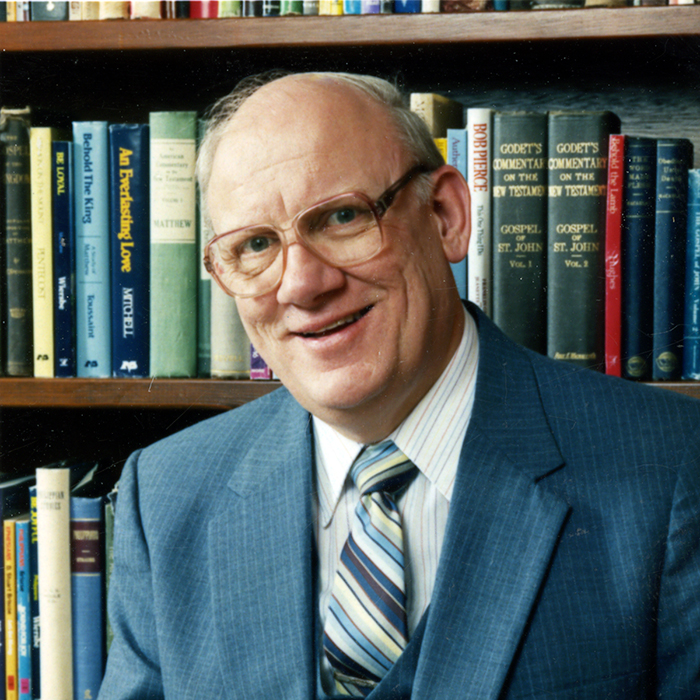 Want to spend an enjoyable afternoon? Google the phrase “according to Warren Wiersbe,” then start reading. You’ll be drawn into thousands of web pages.

The popular pastor, author, and radio speaker had a way with words, a gift for explaining Bible passages so everyone could understand. He became an evangelical quote machine, generating memorable phrases on nearly any topic. And though he is remembered for his international writing and speaking ministry, many also remember his roots as a GARBC pastor.

Growing up in East Chicago, Indiana, he attended a church that hadn’t made a big impact on his life, not he until volunteered to be an usher at a 1945 Youth for Christ rally. A young Billy Graham spoke that night, and Wiersbe made two important decisions. Halfway through the sermon he prayed for salvation—and committed to becoming a preacher.

Unsure of his next step, Wiersbe went to his favorite hangout, the Indiana Harbor Public Library, and checked out a Scofield Study Bible. Soon he began attending Central Baptist Church in East Chicago. Graduating as valedictorian of his high school class, he was given a one-year scholarship to the local branch of Indiana University. He then transferred to Northern Baptist Theological Seminary in Chicago, where he found another reason to love libraries. That’s where he met future wife, Betty Warren, who worked there three days a week.

When Central Baptist needed an interim pastor in 1950, it seemed natural to hire the seminary student who was already a member of the congregation, and in 1952 the church called him as full-time pastor. Wiersbe graduated from Northern in 1953 with a bachelor of theology degree, married Betty, and settled into church ministry.

Wiersbe’s 1951 ordination at Central Baptist would become legendary among old-school GARBC pastors—with more and more of them claiming, “I was there”—for two reasons. Already Wiersbe was demonstrating an unusual grasp of Biblical theology and practical wisdom. But he is also remembered for his fast wit. When the ordination council asked him to define the invisible church, he said, “That’s what meets on Wednesday night.”

In 1957 Wiersbe resigned his pastorate and moved to Wheaton, Illinois, to take a position with Youth for Christ International. He traveled extensively, edited YFC Magazine, and began a prolific period of writing projects. Though he ministered in a wider circle, he still considered himself a Baptist, as long as everyone understood his priorities. “I had decided to be a Christian first, a pastor second, and a Baptist third,” he would say. In 1961 he accepted the call to Calvary Baptist Church of Covington, Kentucky, intending to become Dr. D. B. Eastep’s associate pastor. But Eastep died suddenly and Wiersbe became senior pastor, where he remained for 10 years.

Preaching three times a week had a profound effect on his writing. He moved away from youth topics in order to concentrate on exegetical resources. As he published more articles and books, his ministry inevitably broadened. His passion to equip the church extended to the whole church, a tension that brought a few sharp barbs from his old friends.

In his autobiography he reflected on the ideological simplicity of his early years: one side (his) that believed in fundamental doctrines of the faith, and the other side—liberals. But now the evangelical world seemed fragmented, and he grew weary trying to keep track of the various teams. “I attended an American Baptist Seminary, was ordained by a Regular Baptist church, and for ten years pastored a Southern Baptist church, and have lived to write about it,” he said.

While in Covington he also began a long relationship with Cedarville College, speaking in its chapel services and asking its president, James T. Jeremiah, to fill the Calvary Baptist pulpit when Wiersbe was away from the church. Then Moody Monthly asked him to write a regular column for pastors, followed by another opportunity in Chicago—Moody Church asked him to candidate as pastor.

The resulting years at Moody Church, from 1971 to 1978, would be remarkably productive. In addition to his pastoral ministry, he became host of the church’s Songs in the Night radio broadcast and continued as a conference speaker. When he wrote a brief commentary on 1 John and titled it Be Real, he did not view it as the first in a long series. But the project expanded to include the whole Bible, running to 50 volumes, and became a go-to source for pastors and Bible study leaders.

One such student was John Greening, now retired as the GARBC’s national representative. “My preaching ministry is indebted to Dr. Wiersbe,” Greening said in a tribute. “It was from him I learned the importance of a clearly stated proposition with a lead word; the insight of ‘the then-ness and the now-ness of a passage’; main points stated in parallel as timeless truths; the value of the three-pronged hook of the title, the introduction, and the conclusion; and the wise length of a message and series.

“All of that may sound a bit technical in an obituary! But a preacher without a good set of preaching tools will be far less likely to turn out a finished product each week, sermons that are worthy of the Bible’s author and readily accessible to the varied learners. It is with profound gratitude I give honor to whom honor is due. Thank you, Dr. Wiersbe, for teaching me the skills of the trade.”

Moving to Lincoln, Nebraska, in 1980, Wiersbe became a Bible teacher and general director at Back to the Bible Ministries. There he met the late Norm Olson, then editor of Good News Broadcaster. The two of them worked to rebrand the magazine as Confident Living, then Olson moved to Chicago to become managing editor of the Baptist Bulletin. Wiersbe, a longtime Baptist Bulletin subscriber, was a big fan of denominational magazines. “Don’t let that magazine die,” he would say to Greening and the editors at various times through the years.

In 1995 the GARBC’s Council of Eighteen invited Wiersbe to preach a series on prayer at the GARBC Annual Conference in Toledo. His sermons led to a commendable conference resolution and a few more classic Wiersbe quotes.

According to Warren Wiersbe, “Knowing God is more than theology in the head; it’s an experience in the heart; and you say with the Emmaus disciples, ‘Did not our heart burn within us?’ (Luke 24:32). The mark of spiritual enlightenment isn’t a big head; it’s a burning heart. ‘Knowledge puffs up, but love edifies’ (1 Cor. 8:1).”

Among the honors he received later in life, Cedarville College presented Wiersbe with a doctor of letters degree in 1987. And last December, he donated his 14,000-volume personal library to Cedarville, to be located in a new reading room at Cedarville’s Center for Biblical and Theological Studies.

As one who covered nearly every topic in the Christian life, Wiersbe, unsurprisingly, concluded his autobiography with a reflection on his own eventual death:

“After I’ve attended my last meeting and preached my last sermon, written my last book and answered my last letter, told my last joke and said my last goodbye, and I wake up in the presence of my Lord, I want to be able to say to Him what Jesus said when He came at the end of His earthly ministry: ‘I have glorified You on the earth. I have finished the work which You have given me to do’ (John 7:4).”