Searching for the Authentic Church

What’s the easiest way to identify the genuine article? First learn to recognize a fake, says Dr. Bill Park, featured speaker at the 2012 GARBC Conference. During his opening sermon he played a brief video clip exposing the false doctrine of several well-known preachers. It was painful to watch. Offensive, even. But that was Park’s [...] 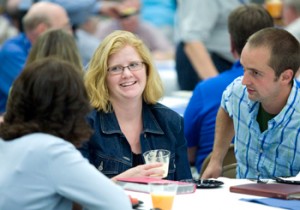 What’s the easiest way to identify the genuine article? First learn to recognize a fake, says Dr. Bill Park, featured speaker at the 2012 GARBC Conference. During his opening sermon he played a brief video clip exposing the false doctrine of several well-known preachers. It was painful to watch. Offensive, even. But that was Park’s point—false preaching is an offense to the gospel and an enemy of the authentic church. Throughout the afternoon, messengers began gathering on the campus of Baptist Bible College and Seminary for the 80th annual conference of the General Association of Regular Baptist Churches. About 800 guests have registered for the event, with 700 attending the opening night. “Our responsibility is to be alert with discerning ears to the perversion of the glorious gospel, Park says, urging leaders to build authentic churches by proclaiming the glorious gospel of Jesus Christ. His sermon was the first of ten planned from the book of 1 Timothy. During his introductory remarks, John Greening gave testimony of his experiences as a preacher’s kid suffering from “juvenile restless leg syndrome,” one who eventually grew up to be a preacher himself. Speaking of the steep learning curve for young pastors, Greening says “the ministry is not a vocation for a novice. The complexity of pastoral service requires the wisdom and experience of a seasoned pastor.” Greening met Bill Park when both served on the Baptist Bible College board of trustees. Both have sons the same age who attended BBC together. At the time, Park was still pastor of High Point Baptist Chapel, Geigertown, Pa., a ministry that has planted nine other Baptist churches. Today Park is professor of missions at Calvary Baptist Theological Seminary, Lansdale, Pa., where he helps coordinate the seminary’s overseas teaching ministry and church-planting initiatives. (He and his wife, Betty Jean, were celebrating their 47 anniversary on the opening night of the conference). “I hope we leave here this week with a renewed glimpse of the great grace of our God, and how He wants us to do authentic church,” Greening says as he introduced the week’s theme. The conference participants represent about 1,200 GARBC churches in 45 states, Canada, and Saipan. Several related ministries will give reports later in the conference week: Earlier in the day a group of GARBC chaplains met for in-service training. Dr. Alan Ingalls, associate professor of Old Testament languages and literature at Baptist Bible Seminary, led practical sessions to help the chaplains develop brief Bible studies from Ecclesiastes. Each chaplain went home with 13 Bible studies, having benefited from advanced training in hermeneutics. The group included military chaplains, institutional chaplains, and community service chaplains. Also on Monday, the GARBC Council of Eighteen met for their mid-year meeting, which tends to be briefer than the longer meeting held in November. The council influences the association by recommending action to the churches, and by implementing its policies. Both roles were seen in the meeting today. The council recommended two resolutions that will be presented to the messengers for a vote during the week of the conference, one on universalism and one on the importance of the local church. The council is also recommending two changes to the GARBC’s Articles of Faith; these will also be introduced to the conference messengers later in the week. The proposed changes will clarify that marriage is “the joining of one man and one woman,” and will clarify that the offices of pastor and deacon are reserved for men. John Greening reported progress on a strategic vision and action plan, showing the council a draft that had been prepared as the result of monthly online meetings with a group of seven pastors. After continued discussion and revision, the council plans formal action on the proposal in November. The council continues to clarify some matters of policy, such as their new statement on the Bible translations used in GARBC publications. [The policy affirms the use of the King James Version, New King James Version, American Standard Version (1901), English Standard Version, Holman Christian Standard Bible, New American Standard Bible, New International Version (1984), New Scofield Reference Bible, and The Amplified Bible.] The council’s action provided a clear example of how it works. Each local church in the fellowship is independent and autonomous, so the council would never tell an individual church which Bible translation to use. But the council does develop policies for Regular Baptist Press, describing what Bible translations will be used in its official publications. The council is arranged into several subcommittees who work throughout the year, usually through online meetings. While their function is primarily advisory, the individual members have invested a great deal of time in preparing for the meetings. “The council is working as hard and as diligently as we have ever worked,” says Bernie Augsburger, who has served on the council since the mid-1980s and is currently its chair. Daily coverage of the conference can be found at www.BaptistBulletin.org and www.garbcconference.org, including photos, news articles, sermon videos and MP3s, and downloads.
Posted in Featured Stories, Miscellaneous on June 26, 2012.