John W. Rawlings, a leader in the Baptist Bible Fellowship International and the longtime pastor of Landmark Baptist Temple, Cincinnati, Ohio, died on Jan. 30, one day after his 99th birthday. Born Jan. 29, 1914, in Cave City, Ark., he was saved at the age of 13. He later testified how his mother had prayed [...] 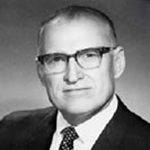 John W. Rawlings, a leader in the Baptist Bible Fellowship International and the longtime pastor of Landmark Baptist Temple, Cincinnati, Ohio, died on Jan. 30, one day after his 99th birthday. Born Jan. 29, 1914, in Cave City, Ark., he was saved at the age of 13. He later testified how his mother had prayed and given him to the Lord to be a preacher before he was born. He married his childhood sweetheart, Orelia Mobley, when he was 18. He enrolled Bible Baptist Seminary, the institute started by J. Frank Norris at First Baptist Church, Fort Worth, Texas. Rawlings would become the first man to finish the full course. Rawlings was pastor of Central Baptist Church, Tyler, Texas (1940–1951). He was part of a group of pastors who met with G. Beauchamp Vick in 1950, breaking away from the World Baptist Fellowship and J. Frank Norris to form the Bible Baptist Fellowship. At the time, Rawlings was serving as the alumni association president and a trustee at Norris’s school; his break with Norris became a key factor in the growth of the BBF in Texas. He continued as a leader in the BBF when he became pastor at Cincinnati’s Landmark Baptist Temple in 1951. His ministry was marked by aggressive evangelism, growth, and innovation. At its height, more than 4,000 attended; his Landmark Hour radio broadcast was heard on 100 stations. He served several terms as president of the Baptist Bible Fellowship International and vice president of Baptist Bible College in Springfield, Mo., then retired as Landmark’s pastor in 1994. Moving to Lynchburg, Va., he became a consultant to Jerry Falwell and helped start the National Liberty Journal. At a Baptist Bible College (Springfield) event in 2000, Falwell named Dr. John Rawlings “Mr. Baptist of the 20th Century,” presenting the honor on behalf of Liberty University. In the 1960s, Rawlings participated in several meetings of the Fundamental Baptist Congress of North America, where he became friends with GARBC leaders such as John Balyo, Bernard Bancroft, Paul Jackson, and Robert Ketcham. Sermons from these meetings, including some from Dr. Rawlings, were later published by Regular Baptist Press in a five-volume collection, The Biblical Faith of Baptists. His first wife, Orelia, preceded him in death in 2007 after 75 years of marriage. He is survived by his second wife, Mary; four sons, Herbert, Harold, Carrol, and George; nine grandchildren; and 17 great-grandchildren.
Posted in Miscellaneous on February 6, 2013.