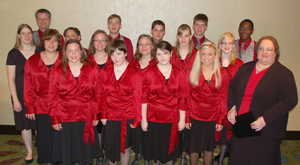 Iowa City, Iowa—When you’re traveling to compete in Talents For Christ, remember to pack the important things, like sheet music and a pitch pipe. And pudding.

The teens of Faith Baptist Church always travel with pudding, and snack packs of pudding made the four-hour journey from Iowa City, Iowa, to Schaumburg, Ill., this year. These 14 teens competed as two vocal ensembles and three individual competitors, winning the Top Team Award.

Introduced three years ago in Ankeny, Iowa, the Top Team Award encourages whole youth groups to compete together in Talents For Christ. When groups enter at least five categories (including open and group competitions), the scores are averaged together for a team percentage. The youth group with the highest percentage receives the traveling plaque, on which the year and church’s name are engraved. Smaller youth groups can join other youth groups to form a team.

Having directed the Faith Baptist Church Youth Choir for seven years, Laurie Hamilton recognizes the importance of teens ministering together. The director of both ensembles, she knows that competing as a group forces teens to shift the focus off themselves and onto the group.

“You can’t promote one voice in a choir,” Hamilton explains. “It has to be the group as one voice, one body, one unified group together.”

And minister as a unified group they did. Singing “Beautiful Hands” and “God Has Provided a Lamb,” the large ensemble won first place, and the quartet placed second with “God Is Near” and “The Rocks Will Cry Out.”

The ensembles have been practicing since January, and Hamilton employs interesting techniques in rehearsal to keep the songs fresh and fun, such as pretending to be opera singers or singing staccato. But even in rehearsals, Hamilton encourages the teens to get involved in the text, regularly asking how the words are important to them.

Going to conference isn’t cheap. The youth group adds up all expenses and divides that number by how many teens will go, resulting in the amount each teen will have to pay. Although the church takes an offering to subsidize the teens’ expenses, each teen ended up paying about $95 this year.

The teens don’t do fundraisers because the church wants the teens to trust God for funding.

“There’s got to be a definite reliance on God,” Hamilton says. “That strengthens their faith and outlook.” And God did provide for the teens to come to conference—including Hamilton’s finding the ensembles’ matching blouses on sale.

The teens have a fun summer planned with movie nights, game nights, and singing together. In early August, a group plans to return to Schaumburg, Ill., to attend the Majesty Music College. And, yes, they will bring pudding.