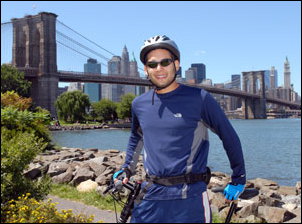 At 6:00 p.m., when I reached the French Town Bridge, approximately 1 mile from New Life Island, the odometer mounted to my bike read 115 miles. Strangely, my first thought upon making my destination was not to head straight to camp and lie down on a nice comfortable bed, but rather to cross the Frenchtown Bridge into Frenchtown, visit a small pizzeria called Napoli’s, and have a giant chicken parm on a gyro. As I sat in the pizzeria, I couldn’t help but think, “man, a sandwich has never tasted this good in my LIFE!” I mean, I had not had a decent meal in over 12 hours, having left Friday morning, October 6th at 5:00 a.m. From that early morning start, I had been consuming Gatorade, water, Power Bars and Power Gels that burn as it makes its way down to your stomach. I had first presented this idea to Norm MacKenzie, director of New Life Island, on September 8 and 9, 2006, during New Life Island’s annual teen retreat. The overall plan included a grueling bicycle ride of over 100 miles from my hometown of Brooklyn, New York to Upper Black Eddy, Pennsylvania (the physical address of New Life Island). Why did I do it? Well, I can’t properly answer that question without giving my personal history with the Island.

It was on a Wednesday night, during prayer meeting, in the summer of 2000 that Pastor Donald LeMaster, pastor of Brooklyn Baptist Church, brought a prayer request to our attention from Norm MacKenzie, director of New Life Island—a Christian camp ministry based on an Island situated on the Delaware River. Norm’s request was for two counselors that would be willing to fill in for one week of camp that promised more children than what the summer staff would be able to handle. Now up to that point, I didn’t even know there were islands on the Delaware River; secondly, I had never even heard of New Life Island, even though by car it was a meager 80 miles away; thirdly, I hated camp when I was a kid, and the furthest thing from my mind was that I would be a counselor at a Christian camp. Well, the Holy Spirit gets His way, and I accepted Norm’s request.

The Lord’s work is beyond our ability to understand. When I accepted Norm’s request, I had never counseled a soul in my life. I was truly stepping into territory in which literally I had no experience. But the Lord is not particularly concerned about skills, but He is more interested in the heart. Are we willing to do His work? There are no skills needed in a willing heart, and when God sees that one is willing, He will supernaturally give you all the skills needed to complete the task He has set before you. As it turns out, at the end of that one week of service to the camp, Norm asked me to stay for a second week that also promised a high attendance of campers. It took me a microsecond to say yes, and after just two weeks of youth camp, God had changed my life. He changed my life so much that I served as a New Life Island camp counselor during the 2001, 2002, 2003, and 2004 camp seasons.

With the clear conviction that New Life Island IS God’s camp ministry, Norm has directed NLI on a solid Biblical foundation. New Life Island, as we have been taught by Norm during counselor training, is a “refuge”—a place God has provided where people, especially children (saved and unsaved), can come for one week out of the year and separate themselves from all the distractions this world has to offer and meditate on the Word of God. It is a place where unsaved children WILL hear the gospel, and saved children will grow in their relationship with our Savior. This mission, year after year, is accomplished in three ways: first, with the natural settings of an Island located on the beautiful Delaware River where “His invisible attributes are clearly seen, being understood by the things that are made, even His eternal power and Godhead” (Romans 1:20); second, through the carefully selected speakers who are dedicated to clearly expounding the Word of God in its full meaning with accuracy and proper context; third, and most important, through the carefully selected camp staff who live out all of the truths the campers learn from the Word of God. It is this environment that encourages children to make decisions for Jesus Christ, so that by the end of the week, “No one leaves the same.” This is why New Life Island has carved a special place in my heart.

It’s also why I decided to help the camp financially when a major flood struck this past summer, causing enough damage on the Island to suspend camp for the whole summer. The event really hit me hard as I thought, “Who is going to minister to the children?” Because of the flood, New Life Island was holding a walk-a-thon/bike-a-thon fund raiser on October 7, 2006, to help recover from the physical damage the camp suffered as a result from suspending youth and family camp for the whole summer. That’s when I presented my plan to Norm during the teen retreat. If I had promised donations adding up to at least $1500 dollars, I would ride my bicycle on October 6, 2006, several miles up Manhattan Island, across the George Washington Bridge, and straight west through New Jersey to Easton, Pennsylvania. From Easton, Pennsylvania, I would ride the last 20 or so miles down river road (Route 32) to the footbridge of New Life Island. Two days before the ride, I had $1600 in promised donations, so I rode, and it was a ride that really tested my will to accomplish something I had set my heart on doing. Before that ride, my peak distance on bike was about 45-50 miles. On previous bike rides I had discovered that the 45-50 mile mark was the point when I experience severe fatigue and would need to stop soon after. So a ride of over 100 miles was scary, for what would happen after the 50 mile mark? Well, the Lord gave me the strength after the 50 mile mark, and I was able to press on through all the legs of the ride. There were times when I got off my bike to walk up a steep hill or traverse difficult terrain, but I kept moving forward without stopping for much rest. I kept thinking to myself, “I can’t stop because I want to keep my word and finish this, and secondly, I don’t want to get caught at night riding through New Jersey’s countryside!!!” Fear is a really good motivator at times.