Victor W. Decker went Home to be with his Savior on Jan. 28, just two weeks short of his 87th birthday. Victor, a retired GARBC pastor, died peacefully at home after a lengthy illness. Victor began ministry in the mid-1940s after graduating from Mehoopany (Pa.) High School, and after an accident and illness nearly took his [...] 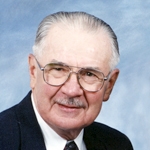 Victor W. Decker went Home to be with his Savior on Jan. 28, just two weeks short of his 87th birthday. Victor, a retired GARBC pastor, died peacefully at home after a lengthy illness. Victor began ministry in the mid-1940s after graduating from Mehoopany (Pa.) High School, and after an accident and illness nearly took his life. After he recovered, he drove his uncle, a blind Methodist circuit preacher, on his weekly preaching rounds. It was during those trips with “Uncle John” that God called Victor to preach. His own pastor at Mehoopany Baptist Church initially sent him to Eastern Baptist Seminary to prepare for ministry. Victor came home before the second semester and found a long-closed church near Mehoopany, tracked down the trustees of the building, and began preaching each Sunday at Fox Hollow Church. The following year, at the age of 21, he began his studies at Baptist Bible Seminary, Johnson City, N.Y. The next year he became the interim pastor at Tunkhannock Baptist Church, and on Jan. 1, 1949, started a new church in Tunkhannock that would become Osterhout Bible Church. In those early years of ministry he would serve part-time in several churches simultaneously, “often pastoring one church and serving as interim at one or two others, all while a full time student,” says his son Rod, professor of New Testament and Greek at Baptist Bible Seminary, now located in Clarks Summit, Pa. In 1983, Victor preached the funeral service for Pastor Al Cooper, whom he described as “his dearest friend and colleague in ministry.” In that sermon he reflected back over his training and early ministry. These were his words: “In September 1947 Al and I were entering freshmen at Baptist Bible Seminary in Johnson City, N.Y. We were part of a group of post–World War II older young men who hadn’t come directly from high school. Of course, we weren’t really as old as some of the 17- and 18-year-old boys thought we were! But we knew why we were in school again. We were there because God had laid His hand upon us, called us by His grace, and given us an unshakeable assurance of His leading. “We were in school to learn and to serve. I was, and Al soon became, a student pastor. Our zeal may have exceeded our wisdom, and presumption [may have exceeded] our faith. But those were wonderful, precious, and yes, hard days. As we studied, prayed, and served, we grew together in a bond of mutual love and respect which has endured the tests of time and trials.” Victor graduated from BBS in 1950 and continued to pastor the Osterhout church for the next 53 years. He ministered bivocationally for the duration of his ministry, continuing the family farm in Mehoopany; for many years he was well known for his large flock of sheep that grazed along Sugar Hollow Road. Initially, ministering bivocationally was a necessity, so he could pay the bills as a church planter, but later it was his choice, enabling the church to put more money into missions. The church eventually sent more than 50 percent of its annual budget to missionaries. Victor was active in his community, serving on the Vaughan Cemetery Board, the Pennsylvania Wool Growers Association, the Pastors’ Bible Fellowship, and other such groups. He made multiple trips overseas to preach and minister in South America, Central America, and Africa. His wife, Agnes, preceded him to Heaven in 2010. He is survived by four children: Rodney, Baptist Bible Seminary professor; Evelyn Stone, an ABWE missionary in Peru; Suzan Brewer, active in her church in Missouri; and Cecil, a deacon in his church near Gettysburg, Pa; as well as 16 grandchildren (including another ABWE missionary and a third-generation “Pastor Decker”), 27 great-grandchildren, and his sister, Geraldine Shoemaker.
Posted in With the Lord on February 1, 2013.

Next post Leaders Learn about the Business Side of Ministry

The gospel is displayed through our lives, but it also must be proclaimed and explained by our ...more

The Attractional Quality of Beauty

We don’t have to choose between the substance of the gospel and the beauty of the gospel. We are called to ...more

The Power of Storytelling in Evangelism

Now is the time to tell your story. Because you do have a story. And it ...more

Ministerial Fidelity in a Sin-Cursed World

Remembering the High Cost of Unholy Living By Jeff Straub Editor’s note: The May/June issue of the Baptist Bulletin explored the phenomenon of ministry collapse and offered ...more