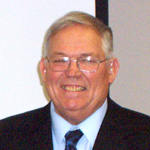 At Restored Church, lives are changing as a result of the Lord’s work through the ministry of the church and its partnership with Regular Baptist ...more