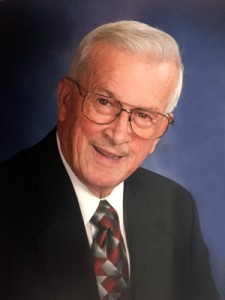 Roger was raised outside Grove, Oklahoma, and trusted the Lord Jesus Christ as his Savior in 1941. He attended the University of Illinois before graduating from Moody Bible Institute in 1955.

He went on to serve in pastoral roles, leading his churches through numerous building projects. Wherever he was ministering, he actively supported the General Association of Regular Baptist Churches and faithfully served in the association’s state fellowships.

Roger joked about flunking retirement and went back to work as a small engine mechanic, working for Gothic Landscape before finishing with Green Innovations in the fall of 2015.

Over the years he served on the board at Shepherd’s Home and School in Union Grove, Wisconsin. He was also actively involved in the ministries of Camp Manitoumi in Illinois, Camp Fairwood in Wisconsin, and Camp Tishomingo in northern Arizona.

Roger loved the Lord and preaching God’s Word. He was not a talkative man, but many people appreciated his wise counsel, wry sense of humor, and consistent example of fidelity, integrity, humility, and service.

He is survived by his wife of 60 years, Donna; his children, Roger, Scott, Linda Dueck, Dale Williams, Todd Williams, and Jeannette Clark; 17 grandchildren; and 15 great-grandchildren.

NEWS FROM REGULAR BAPTIST MINISTRIES Mike Hess, GARBC National Representative It’s with great enthusiasm that I encourage you to register soon for the GARBC Annual Conference, which ...more