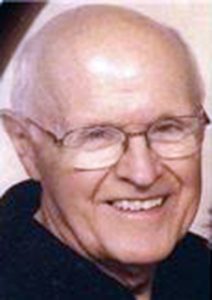 After graduating with an accounting degree from Bob Jones University, Milt worked at Bendix Corporation’s New Jersey headquarters for several years before moving to Ann Arbor, Michigan, to work at a CPA firm and enjoy watching the University of Michigan’s band practices under Dr. William D. Revelli. Milt then served as the first business manager at Dublin (New Hampshire) Christian Academy, where he also taught Bible and coached soccer. During that time he was also a volunteer fireman with the Dublin Fire Department.

After moving to Illinois, Milt was assistant treasurer and conference coordinator for the General Association of Regular Baptist Churches in Schaumburg for 31 years. He retired to Indiana in 2007.

Always active, Milt enjoyed swimming, biking, and running. He was a lifeguard in his college years and later became a swim instructor at the YMCA. Also an avid musician, Milt played the piano, trombone, violin, and bass viol. He was very involved in every church he was a member of, serving as a deacon, worship leader, and Sunday School teacher.

Milt’s mission in life was to tell people about Jesus, which he did regularly. “He never passed up an opportunity to share the gospel—on a plane, at the gym, or with a hotel or restaurant worker as he traveled for the [GARBC] Conference,” says Jan Salzman, editorial manager of children’s curriculum for Regular Baptist Press.

Valerie Wilson also worked with Milt before she retired from her role as editor for Regular Baptist Press. “I remember Milt as a humble man who truly did desire to share the gospel with the people God brought across his path,” she says. “I always looked forward to his testimonies when we had staff devotions. I still remember one of Milt’s staff devotions. He spoke on 2 Peter 1:5–7—’Seven Virtues of the Successful Christian.’ Milt exemplified those virtues in the way he did his work and the way he lived his life.”

In addition to sharing Christ with people face-to-face, he often held Bible studies over the phone or via Skype with people all over the world. He put his message in written form with the tract Life After Death: Gift or Reward? published in 2005 by Regular Baptist Press.

He was preceded in death by his daughter Susan Phillippe on April 3, 2015.

He is survived by his wife of 57 years, Gretchen; his children Timothy, Rebecca Fletcher, and Lois Lewis; and 16 grandchildren.

Previous post A New Association Video for Viewing in Your Church!