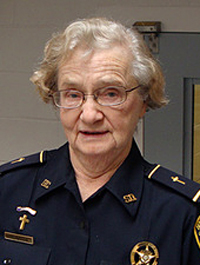 She married F. D. “Doc” Henzler on Aug. 14, 1953. Upon his graduation, they immediately entered the ministry. Marie was not only supportive but active in all of his ministries as pastor, camp director, Bible college instructor, and church planter. She was known as a cheerful, loving woman, and a dynamic Bible teacher for women and children.

When he was stepping down as director with Baptist Church Planters, they were asked to serve as chaplains with the Perry Police Department in 2000. Soon after that, they began to help the chaplain from the Houston County Sheriff’s Office. Upon his retirement, they both became the chaplains for the Houston County Sheriff’s Office. Marie continued to actively serve as chaplain until she suffered a stroke on Oct. 21, and subsequently a fatal fall on Nov. 13.

She is survived by her husband of 61 years, F. D. “Doc” Henzler; their children, Rick, Mark, Mitzi Henzler Hall, and Lois; her sister, Lucille Lewis; eight grandchildren; and 13 great-grandchildren.

The messengers of the General Association of Regular Baptist Churches meeting in session on June 30, 2021, elected six members to the Council of Eighteen: ...more

Unleash the Spirit of Help

Clare Jewell opened his “thriving-churches” workshop at the 2021 GARBC Conference with this profound and thought-provoking statement. Clare emphasized that rather than being bothered by ...more

Moving from Knitting and Missionary Closets to a Titus 2 Ministry

Creating a Titus 2 women’s ministry is both passion and mission for Liz Augsburger and Brenda Moore. These two pastors’ wives saw a need for a ...more