John Ralph Wood, a Michigan pastor and leader known for his sense of humor, died June 10. He was 89. 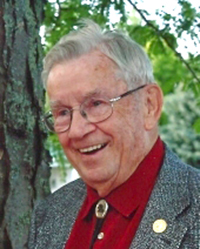 BAY CITY, Mich.—John Ralph Wood, a Michigan pastor and leader known for his sense of humor, died June 10. He was 89.

John was born in Chicago on Dec. 19, 1927. After receiving his high school diploma, he joined the Navy. Later he attended Moody Bible Institute and met his future wife of 67 years, Jean Mitchell. He pastored churches in La Paz, Indiana; Bellefontaine, Ohio; and Cass City, Ecorse, and Lapeer, Michigan.

John also served as the second state representative for the Michigan Association of Regular Baptist Churches (1972–1982). He was a welcomed speaker in the churches and great source of encouragement to the pastors and churches in the state. During his “retirement” years, John served as interim pastor for various churches, most recently at Cornerstone Baptist in Bay City, Michigan.

In giving tribute to Pastor Wood, Mary Hanby Anners wrote, “We truly loved this Servant and will cherish the memories we made with the Woods. We loved his humor and his jokes. . . . We are looking forward to being with John in Heaven and hearing him tell his jokes again.” Karen Houchin Robson wrote, “There are no words to describe the impact that Pastor Wood and Jean made on my life. I think of them both fondly and know that my walk with the Lord is more satisfying and blessed because of their Godly examples to me as a teenager. And of course, I will never forget his wit and amazing sense of humor!” And Miriam Byrd Paulus wrote, “Rev. Wood was a wonderful Bible teacher and much of my faith was founded on his teaching/preaching at Calvary Baptist Church. What a wonderful legacy he has left behind.”

John Wood is survived by his wife, Jean; a son, Ronald; three grandchildren; and four great-grandchildren.

Previous post Students Play Hard, Learn to Build Up the Body of Christ

Funding Needed for Motorcycle and School in Tanzania

In the bush of northern Tanzania, Joseph Ayoo Naftali leads eight churches that have been planted through the Holy Baptist Independent Churches of ...more

Every Nov. 11, our nation pauses to reflect upon and honor its own who have served in the Armed Forces. This year in particular, the ...more

A VBS That Keeps Working: Growth with Goals

Many children take a giant leap forward in their spiritual growth during the week of VBS. But it shouldn’t stop there; that growth spurt should ...more

Bridge-building ministries like VBS can provide powerful connections between earthly families, the life-giving Savior, and the family of God. VBS keeps working when believers reach ...more