Jason Nightingale of Wordsower International died April 19. He was 68. 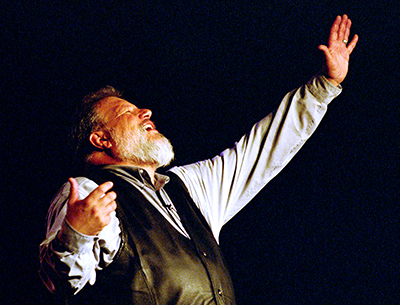 People around the world will remember Jason Nightingale for his powerful voice, his encouragement to memorize Scripture, and his servant’s heart. Jason, founder of Wordsower International, died April 19. He was 68.

Jason Nightingale married his wife, Sharon, on June 8, 1973, the year he accepted Christ as his Savior. He had just finished serving as a medic and operating room technician with the U.S. Army during the Vietnam War and was now performing with Sharon in a Christian theater company called the Covenant Players. Jason, who had grown up in a Catholic home, “started reading the Word to find out the basis for the plays we were performing, and the Lord brought me to Him through the Word.”

Shortly after he found Christ, Jason felt God calling him to share Scripture with others—in particular, by presenting Scripture in a dramatic fashion that would cause people to listen intently and heed God’s Word. “I thought He was calling me to Broadway and the Kennedy Center,” Jason said. But he soon realized that he could perform recitations of Scripture in churches across America as an ordained missionary and evangelist.

With that goal in mind, Jason founded Wordsower Ministries in 1974. He traveled across the country presenting the books of 1 Peter and Revelation with his booming bass voice in an art form that he would later call Scripture telling: using his skills of acting, storytelling, oral interpretation, and chancel theater to dramatically recite Scripture from memory. Jason said, “The Lord didn’t let me sing, so He let me speak loudly.”

Sitting in the quiet basement of his church, Jason memorized the book of Revelation in one month. Eventually he would memorize 18 books of the Bible: 15 from the New Testament, and three from the Old Testament. Anyone can memorize Scripture, he said. The key is to start small: choose a short book of the Bible that is meaningful to you, and then read it aloud, for “the primary part of learning is through your ears.”

Performing in churches, colleges, and other public settings, Jason presented the book of 1 Peter more than 2,000 times. And in each recitation he found a new application, for the Bible is a living Book, and God is always working. As Hebrews 4:12 says, “The word of God is living and active.” But a favorite of audiences has been his presentation of the book of Revelation.

Revelation “is more than an account of the end of the world,” Jason would tell audiences. “It offers a message of hope. Someday you will be in a place with God. You will see him face-to-face. There will be no more pain, no fear, no weakness. You won’t be dying anymore. There will be no want. You will be absolutely, totally, eternally fulfilled.”

In 2001, Wordsower Ministries blossomed into Wordsower International, an organization that includes Jason’s original evangel arts ministry as well as compassionate care for orphans and widows around the world. Wordsower International has founded orphanages and schools in Haiti, Liberia, Sierra Leone, Kenya, and India; sponsors more than 100 children in Nepal; supports widows in Ghana and Liberia; and is planting churches in Liberia, Ghana, and South Africa. 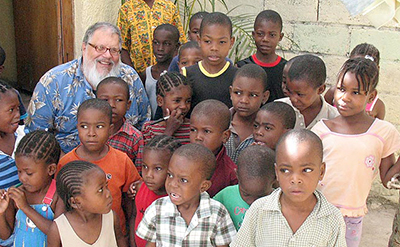 “Can you look at a pile of dirt . . . and see a dormitory arise?” Jason recently wrote. “I can, for God has given faith, and faith is substance, an assurance of things hoped for.” He wrote these words as part of his poem “Faith Gives Substance.” Jason was not only a skilled speaker but also a gifted writer, composing poems that he shared in his weekly newsletters and authoring the short story The Faithful Watchman. (Read four of his poems: “Faith Gives Substance,” as well as three others.)

In 2013 Jason learned of a ministry in Nepal called Children Rescue Mission, which provides basic needs for children to keep them from being trafficked. Over the last four years, he traveled to Nepal five times to assist staff members and helped them launch an endeavor to support indigenous missionaries. He further aided Nepal in a unique event stateside: After a devastating earthquake hit Nepal in May 2015, Jason and a fellow member of Wordsower International, Tom Meyer, raised money to help victims by presenting Bible books from memory for 24 hours straight. Shasta Bible College in Redding, California, hosted and live-streamed the event.

Jason “has left his legacy in Nepal through his support, his teaching, and his service,” says Gyan Pantha, founder and president of Children Rescue Mission. “His memory will live on in the scores of people whose lives are being eternally changed, in particular in the lives of the children in Nepal who are being impacted by Children Rescue Mission.”

In addition to his ministry with Wordsower International, Jason served for a short time as a pastor in California and an adjunct professor at Northwest Baptist Seminary, Corban University, and Shasta Bible College.

Jason encouraged others to not leave it up to their pastors to read Scripture to them but to read the Word for themselves. “Feast upon the Word of God every day,” he said.

He is survived by his wife, Sharon; four sons, Matthew, Micah, Paul, and Joshua; and seven grandchildren.

Melissa Meyer is associate editor for Regular Baptist Press.
Posted in With the Lord on April 25, 2017.

Next post Jason Nightingale of Wordsower International with the Lord